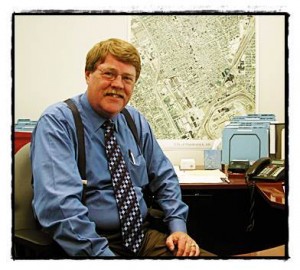 City Manager Bill Cooper is a busy guy these days.

No, it’s not because he’s cold, or because he has a unique sense of style.

It’s due to a strange confluence of things. The former police chief retired several weeks ago, and Cooper decided to appoint himself as acting chief while two lieutenants waited to take a test for the job.

Normally, one of the top cops would have been appointed as acting chief, but Cooper said he wanted to take advantage of the void to familiarize himself with the department.

After the testing was completed, the top eligible lieutenant was rejected by the council. Cooper put the appointment of Lt. Ron Mathias twice before the council.

The first time the council had the appointment in front of them, none of the members offered a motion of support, meaning the matter didn’t even reach a vote.

Last week, Cooper put the appointment once again in front of the council, and this time Councilmember Tom Jankowski offered a motion, but no one offered a second to the motion, which once again prevented a vote being taken.
Jankowski said he wanted the issue to be voted on in order “to get it over with.”

“I’m not here to hide from making a hard decision,” Jankowski added.

Asked by The Review how he would have voted on the appointment, Jankowski declined to comment.

Mathias’ appointment has been controversial because of a lawsuit filed a couple of years ago by an African-American officer in the department accusing Mathias of racial discrimination.
The city settled the suit instead of going to trial.

Two labor grievances have resulted from Cooper’s self-appointment as acting chief, and the other one for the city council failing to act on the Mathias appointment.

By the agreement the city made in the police union contract, the Mathias appointment should have been made, the union says.

Cooper said he is not going bring the Mathias appointment back up. He said he will let the matter be decided by a labor arbitrator. He also said that councilmembers will likely be deposed to explain their failure to OK the appointment.

Next up, the director of public works was recently fired by Cooper for undisclosed reasons.

A search is on for a replacement.

Last week, Fire Chief Steve Paruk announced his retirement, and his last day was Friday.
Just like the police contract, the promotion must come from within the department. Some top fire officials in the department already tested for the chief’s job, but failed.

The next top ranking officers in the department will now have their turn to take the test. If no one passes the test, the senior-most firefighter is automatically appointed, according to the agreement the city made in the union contract.
Cooper said he’s never experienced a labor contract with this kind of arrangement.

This particular contract agreement regarding the appointment of a chief in the police and fire departments was made many years ago, and the circumstances of why that agreement was made are lost to history.

So far, Cooper said he’s able to take care of the administrative part of the jobs, but he concedes he needs someone to oversee the day-to-day operations in each department.

And no, Cooper is not being paid extra for the many roles he’s taken.