City names new stadium infield in honor of a legend 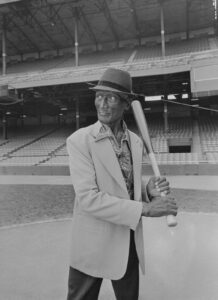 Hamtramck city officials have named the new infield at Hamtramck’s historic baseball stadium in honor of legendary player Norman “Turkey” Stearnes, who played with the Detroit Stars at the stadium.

By Charles Sercombe
There is more action at Hamtramck’s historic baseball stadium.
Not only is there a new infield, the field now has an honorific name: “Norman ‘Turkey’ Stearnes Field.”
Stearnes is a legendary player who played in the Negro Baseball League back in the 1930s, when African-Americans were barred from playing in the all-white Major Leagues.
He played with the Detroit Stars, who’s home field was Hamtramck Stadium.
According to the National Baseball Hall of Fame website, Stearnes was one of the best hitters in his league.
He was born in 1901 in Nashville, and it is said he got his nickname “because of the unusual way he ran, which resembled that of a turkey, with his arms flapping. However, Stearnes himself claimed it was because he had a potbelly as a child,” the Hall of Fame website said.
Stearnes died in 1979, and was elected into the Hall of Fame in 2000. He has family that still lives in Detroit.
The stadium is currently under renovation, which will include repairing the grandstands, which fell into disrepair over the last few decades.
Funding for the renovation is coming from both grants and online fundraising. The importance of the stadium wasn’t known until several years ago, when local baseball historian Gary Gillette and his organization, Friends of Historical Hamtramck Stadium, did exhaustive research on it and discovered its historical legacy.
That research has been used to secure grants.
The state of Michigan has designated the stadium as an official historic site.
Councilmember Ian Perrotta, who has worked on researching the stadium’s historical importance, said the naming of the field in honor of Stearnes “is a great opportunity to recognize one of the best players of Negro League Baseball.”
Another improvement coming to the stadium and field is a commitment from the city to regularly assign at least three police patrols in the area, to make sure vandals don’t damage the site.
That’s something that has plagued the stadium for years. There have been occasional reports of people driving on the field, and other incidents of fires being set in the grandstand.
The pledge to step up police patrols was promoted by a city council resolution introduced by Councilmember Perrotta.
The reason for the resolution, Perrotta said at an earlier council meeting in a resolution he proposed, is to make it “imperative for the City of Hamtramck to show a buy-in of the project by committing necessary resources to ensure the project’s success and show major donors and partners of the project that the City of Hamtramck is capable of taking the required steps to preserve Hamtramck Stadium and the surrounding area. …”
Sept. 11, 2020