City officials fret over the cost of a city hall upgrade 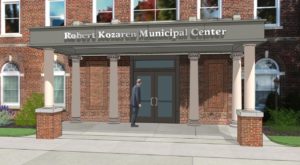 Plans call for renovating the entrance to Hamtramck City Hall. The building will also be renamed the Robert Kozaren Municipal Center, in honor of the late mayor.

By Charles Sercombe
In the coming months, Hamtramck City Hall will get a new name and a new look.
Or, maybe not.
Some members of the city council bristled at the $200,000 cost estimate for the project.
Councilmember Ian Perrotta was straightforward in his concern: “It seems like a lot of money.”
The project includes giving the building a new façade, and making the entrance compliant with the Americans with Disabilities Act — which it technically is not, said City Manager Kathy Angerer.
Angerer also pointed out that there is a committee, comprised of former City Clerk Ethel Fiddler, former Councilmember Joe Karpinski and former Hamtramck 31st District Court Judge Paul Paruk, that will be fundraising for the project.
Angerer said that some funding will also come from the district court’s building fund, as well as from other sources. No general fund money will be spent on the project, Angerer added.
Bids for the project will be coming in soon, so the final cost is not known.
The new name of city hall will be the Robert Kozaren Municipal Center, in honor of the late mayor who is, so far, the city’s longest serving, (although Mayor Karen Majewski is only one term short of matching Kozaren’s 18 years in office).
Concern over the cost was also voiced on Facebook. At a Facebook page called “I love Hamtramck,” there was a lively debate on whether the project was worth the price.
Waleed Ahmed gave it a thumbs down.
“Let’s take the perfectly working entrance and replace it with a more expensive one because there is no better way to spend this money on the community? I don’t care if it is a grant, we don’t need a new entrance,” Ahmed said.
Jeff Fournier called it a “vanity project,” and added that, in light of the city’s financial woes, he questions the timing.
“Does city hall really need a porch cover and a sign right now, while the city is running in a deficit?” he said.
But others gave an enthusiastic thumbs up.
Robert Zwolak, a former councilmember who is now seeking another shot at the seat, was often at odds with Kozaren, but these days has nothing but praise for both him and the city hall project.
“Mayor Kozaren was the ultimate public relations man for Hamtramck. He built bridges from Lansing, with Paczki to state representatives, and Washington DC with President Carter as well as other political and industrial leaders in the region,” Zwolak said.
“I believe he had a photographic memory, and never forgot you or the rest of your family. It was uncanny, his memory, and how he knew so much about people and sports. More often than not, we were foes, but we had great respect for one another. The Robert J. Kozaren Municipal Center is but a small tribute to him for all his dedication to the Hamtramck community.”
The project is not necessarily a done deal. The city council will still have to approve the final bids and cost.
Sept. 20, 2019