City Officials Have No Sweet Tooth For Ice Cream Trucks 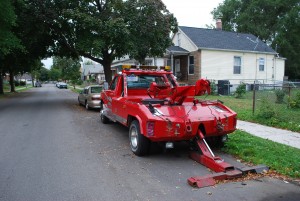 Remember that childhood ditty that went, “You scream, I scream, we all scream for ice cream”?

Well, city officials are singing a slightly different tune, but it certainly involves ice cream, namely a ban on allowing ice cream truck drivers from parking on residential streets and on lots and yards.

Yes, they park on yards.

“They have no place to park, don’t trust Detroit and park in Hamtramck,” Ladd said.

The sight of several trucks herded together is considered — “HELLO” — blight, Ladd said.

But the proposed ordinance banning ice cream trucks sent chills down the spines of taxi cab drivers. Their vehicles are technically covered in the ordinance because the ordinance calls for a ban on all commercial vehicles.

Banning taxis, said City Council candidate Kazi Miah, will hurt taxi drivers who make a living driving cabs and don’t have any other place to park their cabs.

Ladd conceded he “overshot” the intention of his proposed ordinance and didn’t mean to include taxis.

“I don’t want to run businesses out,” he said.

The council also agreed that taxis are not the problem. Ladd said he will tinker with the ordinance to include specific language on the meaning of commercial vehicles. He said, however, the ban would also include panel trucks and independent tow truck drivers who park their vehicles in residential areas.

Now, if the city could only do something about those annoying ice cream truck jingles.