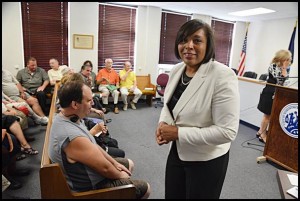 Hamtramck Emergency Manager Cathy Square presented her financial recovery plan for the city at a recent town hall meeting. A majority of city officials have rejected her plan.

What does the mayor and a majority of city councilmembers have to say about the financial recovery plan that was proposed by the emergency manager?

At Tuesday’s city council meeting Councilmembers Robert Zwolak and Cathie Gordon proposed a resolution of support of the plan, but it was voted down by their colleagues in a 4-2 vote.

Mayor Karen Majewski, who was not required to vote on the matter, volunteered that she was also against it.

“I was not satisfied with the level of detail or proof,” Majewski said of the projected cuts.

Majewski even went further saying that when Emergency Manager Cathy Square was asked questions about her plan at a town hall meeting the week before, she did not answer “accurately or truthfully.”

The main rub for the councilmembers was over what is likely the most controversial part that calls for imposing a one-time only tax millage on property owners.

Councilmember Mohammed Hassan said that before considering a tax Square should first restructure the Fire Department, which he said is currently budgeted at $5 million and should be reduced to $3 million.

Councilmember Anam Miah agreed, saying that the reason the council asked for an emergency manager was because the council did not have the legal authority to override the contracts for firefighters and police officers.

He added that the costs for both departments are “90 percent of the problem.”

Algazali has consistently voted against any proposal to raise taxes or fees to help balance the budget. His opposition, however, presents an irony in that it was recently discovered that he is delinquent in property taxes on four buildings he owns, to the tune of $17,000.

His tax delinquency could mean he violated the city charter, and he could be tossed out of office for violating it.

Algazali finished number one in the mayoral primary election held a few weeks ago.

Also in opposition to the financial plan was Councilmember Tom Jankowski, who said he thought part of the plan was “vague.” He also said the resolution is “useless” since the state is not asking city officials to support it.

Emergency Manager Square was on vacation this week and could not be reached for comment.

Councilmember Zwolak said he proposed the resolution as a show of “cooperation” and to “give full support to the emergency manager.”

“The emergency manager knows we want to work with her,” she added.