City officials try one more time for a millage increase 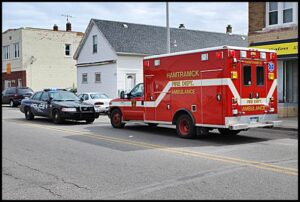 By Charles Sercombe
A divided city council decided to give a city millage proposal one more shot with voters.
At Tuesday’s regular city council meeting, the council split 3-3, with Mayor Karen Majewski breaking the tie, on another attempt to get a millage passed to offset the city’s pension costs for police and fire retirees.
Hamtramck voters soundly rejected a prior attempt by the city to allow up to 10.5 mills to be placed on property taxes.
The city currently levies a half mill for the pension cost, but that only brings in $100,000 a year for a pension that costs $2.2 million.
Councilmembers Mohammed Hassan, Saad Almasmari and Mohammed Alsomiri voted against the proposal, while Councilmembers Ian Perrotta, Nayeem Choudhury and Fadel Al-Marsoumi voted in favor.
The tie forced the mayor to vote, which she did to pass the resolution.
Voters will get another crack at the proposal in the Aug. 4 Primary Election.
(Editor’s note: In the print version of The Review it was said the election would be held on May 4. Although that date was stated in an overview of the city council’s resolution, the date was changed during Tuesday’s council meeting.)

The portion of this part of the council meeting was cut off in the Facebook broadcast, so it was not clear what all of the objections were.
However, in the past there was opposition to bringing back the proposal to voters because it was said that property owners are already burdened with other costs, and that the increase is likely unaffordable to many homeowners.
A number of homeowners have lost income in the past year because of the ongoing coronavirus pandemic.
But councilmembers were urged to revisit the proposal in a budget meeting two weeks ago, where auditors presented a dire financial picture of the city in the next two years.
The council was warned that, if the city can’t convince voters to allow this increase, it is likely the city will miss a payment to its pension system.
If that happens, the council was told, it’s likely there would be an immediate lawsuit, and a judge would likely then levy a special tax on the property rolls.
That is exactly what happened in the City of Melvindale, where a pension payment was missed and a judge subsequently ordered 12 mills on the property tax roll for the next 10 years.
Auditors said the court-ordered judgment in Hamtramck could be as high as 19 mills.
“Pay it now, or pay it later,” said Brian Camiller, a partner with Plante Moran, who helped with the audit presentation to the city council.
That budget meeting was considered sobering by many, and graphically showed how bad the financial picture is here.
The city is simply spending more money that it receives in taxes and fines and fees. There is about a $2 million a year shortfall.
Another option for the city is to seek a more modest millage increase, and then make 20-40 employee cuts in the police and fire departments.
The city’s yearly pension costs and insurance continue to increase each year.
So far, the city has been able to dip into a budget surplus, but that will be depleted in about two years – leaving nowhere to turn financially.
While the city is struggling with finances, so are a number of Hamtramck households. During this pandemic, a lot of jobs were lost, and for those who were lucky to hang on to one, many experienced reduced work hours and wages.
It is likely that May’s election will just have this proposal on it. This will give city officials a chance to educate the public about what is at stake.
City officials agree, however, that it will be a hard sell.
Posted March 12, 2021