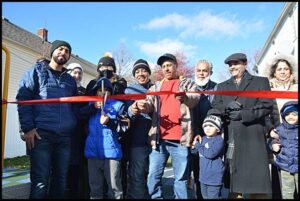 By Charles Sercombe
Hamtramck’s newest, and smallest, park was officially welcomed last week.
Residents and city and county officials held a dedication for “Salam Peace Park.”
Salam is Arabic for “peace”, so yes, technically it’s called “Peace Peace Park.”
This is no ordinary park. It’s what urban designers call a “pocket” park – which is a single city lot that has been converted into a park, with the goal being to provide a neighborhood with green space for kids and adults.
The lot for the park, located at 2134 Trowbridge St., which is between Lumpkin and St. Aubin, was donated by a resident who wishes to remain anonymous.
Funding for creating the park came from an online crowdfunding effort, which raised $25,000. An additional $22,000 was contributed by the Michigan Economic Development Corporation through its Public Spaces Community Places program.
The park has play equipment for kids (or also for adventurous adults), and benches for sitting.
Wayne Metropolitan Community Action Agency also played a role in developing the park.
“Wayne Metro has a number of resources available to assist with initiatives like this,” said Louis Piszker, CEO of Wayne Metropolitan Community Action Agency, in a press release.
“It’s been rewarding for us to provide oversight on this project and work with the city of Hamtramck and the MEDC to bring this beautiful park to life.”
Hamtramck City Manager Kathy Angerer credited the anonymous donor, whose “vision” shows “what that can do for a community.”
Posted Dec. 3, 2021