City real estate up for sale 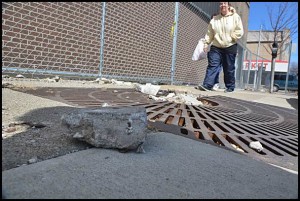 Masonry from a city-owned building on Jos. Campau and Belmont are falling down. Fortunately, the city has a buyer for the property. In the meantime, keep your distance.

By Charles Sercombe
In the past few months the city has been in the real estate business.
Recently, about six dilapidated houses were sold off, ranging from $3,000 each to $14,000. There are about another six to go.
The final touches are being done on selling one of the taller buildings in the city at Jos. Campau and Belmont for $80,000. A team of architects is buying the property, and they are lining up grants to renovate it.
The city came into possession of the building through a tax foreclosure.
The city council will have an opportunity to weigh in on this sale. If the council decides to reject the sale, it has to come up with another purchase price.
The building comes with a lot of issues. The roof is said to leak, and the brickwork on the outside has started to crumble and fall to the ground. The city recently adjusted a security fence around the building to keep pedestrians farther away.
One deal that fell through is for a building on Jos. Campau and Goodson, called the Veterans Loft. The building was formerly a veterans post that had been partially renovated into four lofts until the developer ran out of money.
A would-be purchaser had initially agreed to buy it for $140,000 but pulled out just recently. The building is back up for sale, and sealed bids must be submitted to city hall by this Monday.
Kathy Angerer, the Director of Community & Economic Development, said there are at least a couple of interested buyers, and she expects the building will be sold for about $120,000.
Also up for auction were 54 city-owned lots scattered around the city. The auction was held on Thursday, May 8, the day The Review went to press.