City services could be slashed 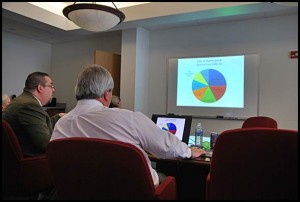 City councilmembers have two ways to go in adopting a new budget:

Strip city services down to the bare minimum, or pass on special fees to homeowners to keep the budget pretty much as it is.

Those were the financial options presented to the council in a special work session Tuesday evening.

By City Charter, the council must adopt a budget by June 2 for the new fiscal year, which begins July 1.

It’s questionable if the council will meet that deadline, but that doesn’t really matter since there are no immediate consequences if the deadline comes and goes without a budget.

Councilmembers are grappling with a new budget as state officials continue to gather financial information on the city in preparation of recommending state intervention.

That could result in an emergency manager taking over – which is something the council has already asked state officials to speed up.

If the city were to adopt a budget that covers the cost of just services mandated by labor contracts and the City Charter, over $1 million would be cut. That would result in city employee layoffs and the elimination of the Community & Economic Development Department, among other cuts.

For the public, that step would result in only the city clerk staffing her office and only the treasurer staffing his office.

There is a way, however, to keep city services pretty much intact, but that will mean hitting up homeowners.

For example, the expense of operating street lights, which costs the city $500,000 a year, would be passed on to homeowners as a special fee. In another cost-saving measure, the city could place the $125,000 it will spend this year on settling lawsuits this year on the property tax rolls for homeowners to pay.

The city already charges homeowners for rubbish collection, but Acting City Manager Kyle Tertzag said there are additional costs that can be added in the form of a fee.

Tertzag said another way to bring in extra money is to hire more code enforcers. He said that for every $1 spent on enforcing housing codes, $1.60 is returned to the city in the form of fines.

If these actions are taken, Tertzag said, the average increase in costs to homeowners would be about $100 a year.

That plan might be a hard sell to some on council. Councilmember Cathie Gordon didn’t hesitate to object. She said the city can’t balance the budget “on the backs of residents.”

No matter what action is taken, it is being seen as a temporary fix until the labor contracts for firefighters and police officers expire in June of next year.

Tertzag said that a combination of $3 million in cuts need to be made from the police and fire departments.

Councilmembers will take another crack at the budget in a work session this Tuesday, an hour before Tuesday’s regular council meeting.