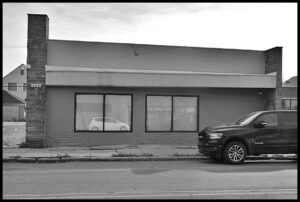 The Hamtramck Zoning Board of Appeals recently turned down a request by the owners of this Caniff Ave. building to rezone it from being residential to commercial. Some of the ZBA members rejected the request for fear that it was going to be a recreational marijuana sales outlet.

By Charles Sercombe
Hamtramck may end up being a one-marijuana-shop town.
A majority of city councilmembers took the first step, at a special meeting Tuesday, to outlaw future cannabis operations from setting up business in the city.
A public hearing on the proposal will be held on Dec. 8, and the council could vote on the proposal that night.
If passed, it would go into effect after its publication.
The action taken came on the heels of the sudden opening of a recreational marijuana retail shop two weeks ago on Holbrook Ave.
That opening took a number of people by surprise, since there was no advance notice about it.
The issue of allowing marijuana operations to take root in the city was last dealt with about two years ago. At that time, several public forums were held on whether to allow marijuana businesses to open here.
There was a huge pushback mostly from members of the Bangladeshi and Yemeni communities. They centered their opposition on the belief that busines of that type would attract crime, or lead to minors getting access to the products.
Medical and recreational marijuana sales and use are legal in Michigan.
Former Hamtramck councilmembers failed to either opt in — or opt out — in permitting marijuana businesses to open here.
That inaction left the door open, by state law, to allow marijuana shops to open.
Now, four out of six councilmembers want to shut that door for future entrepreneurs.
Those supporting the ban on marijuana outlets include Councilmembers Mohammed Hassan, Nayeem Choudhury, Mohammed Alsomiri and Fadel Al-Marsoumi.
Those opposed are Mayor Karen Majewski and Councilmembers Ian Perrotta and Andrea Karpinski.
At Tuesday’s over two-hour council meeting, there was more of a cross-section of the community weighing in on the matter.
The Bangladeshi and Yemeni communities were still dead-set against it, but other residents came out in force to show their support for allowing marijuana stores to open.
The arguments against remained the same: crime and the influence on youngsters, as well as the prior opposition voiced a couple of years ago at several town hall meetings.
“It’s sad that we have to bring this up again,” said Khalil Refi.
Former Councilmember Saad Almasmari claimed that marijuana leads to heroin use, which caused Mayor Majewski to scoff.
The arguments on the pro-pot side were largely based on economics and freedom of choice.
“How adults spend their money is their business,” said Megan Feather. She added that there should not be a “morality police” who “control what adults do in town.”
Before the council voted on the resolution, councilmembers spoke on the issue.
Councilmember Andrea Karpinski questioned why the special meeting needed to be called, instead of just waiting until next week’s regular meeting.
Having to participate in the Zoom meeting, Karpinski said, “ruined my vacation.”
While those in favor of the ban insisted this was the wish of most residents, Mayor Majewski questioned that assumption. She, like others, suggested putting the matter up for vote among residents.
“Maybe it’s a good idea for a referendum,” Majewski said.
The council’s resolution followed a Zoning Board of Appeals split decision to reject a request to allow a building at 2024 Caniff Ave. to be rezoned from residential to commercial, to allow a marijuana-based retail outlet to operate.
Opponents of the variance insisted that the retail outlet was going to be another marijuana shop. The investors who participated in the Zoom meeting declined to say what the nature of the operation would be.
The building has a prior history of being used as a laundromat and then a computer and cellphone store.
It sits next to a gasoline station that is located just off of the I-75 service drive, and is also next to – east of — several empty lots, and then a social hall.
While the building is zoned is residential, the assessor’s office “classifies” it as a commercial building – the same as the gasoline station next-door.
The ZBA voted 3-2 to deny the variance, with one member, Eric Anderson, choosing to abstain from the vote.
City Attorney James Allen warned the ZBA that it is likely the investors will file a lawsuit to get the variance, and he said that they will likely succeed.
The building and adjoining lots were purchased in 2018 for $500,000.
According to sources, there are at least two or three other sites that are in the works to also become marijuana retail outlets. If those developments do go through, the council’s ban would not stop them from opening, according to state law.
Nov. 20, 2020

One Response to City set to curb pot sales