City takes first step to crack down on speeding drivers 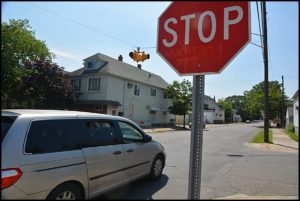 Drivers will begin to see more stop signs popping up throughout town. It’s part of an ongoing effort to curtail speeders and reckless drivers.

By Charles Sercombe
Drivers, prepare to do a lot more stopping in Hamtramck.
And you young guns who like to peel around Pulaski Park? Fun’s over.
City Manager Kathy Angerer said, at a recent city council meeting, that her administration will be installing more stop signs, starting off with two at Pulaski Park, one at Lumpkin and Edwin, and the other at Lumpkin and Norwalk.
That means drivers traveling north- and southbound will have to make two stops before proceeding.
That area has long been a gathering spot for young males, who like to show off in their sports cars and speed around the park – much to the endangerment of young children and families.
Another stop sign will be installed at Casmere and Charest, where Hamtramck High School is located.
At last week’s regular city council meeting, Angerer said these three stops signs “are just the beginning of an entire citywide approach” to pedestrian safety.
She also said there has been a six-month study on where to place stop signs.
“We’re phasing this in really carefully,” Angerer said.
The council welcomed the news.
“This is not a drag-racing community,” said Councilmember Anam Miah.
July 5, 2019