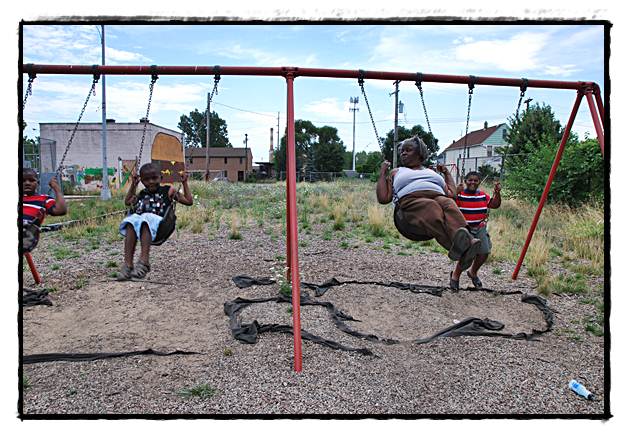 Vennie Valentine takes a swing with her grandsons at the playground in Veterans Memorial Park. The playground is filled with tall weeds and has been neglected for years.

The city’s not messing around.

This time the hired guns are coming out.

After years of threats and complaints, the city is sending out contractors to mow overgrown lawns and pick up debris.

And yes, probably the number one offender is the city itself, considering it owns many of the vacant lots in town.

Acting City Manager Nevrus Nazarko told the city council at Tuesday’s council meeting that after he took a tour of the southend, which is where most of the city’s blight can be found, he decided to send out work crews to cut down the overgrowth.

Nazarko told The Review that “one way or another, hook or by crook” he is starting a clean-up program.

And guess who has to pay for it?

Property owners, which also includes the city for city-owned lots.

Nazarko said a number of property owners have already been issued violations and letters. Those properties, he said, will get attention beginning next week.

If owners don’t clean up their act, literally, by next week, they will get billed for the work and all the time it took for inspectors to issue warning letters. That cost will be placed on their property taxes.

Try something like $100 just to have your lawn cut.

However, as much of a tough guy Nazarko may sound like, he said that if property owners call by next week to claim a financial hardship, things will be worked out.

And if you happen to have a bunch of large trash items on your property Nazarko has a sweet deal for you. He is setting up a dumpster on Denton St. where residents can unload up to two yards worth of trash for free.

Anything over that will cost you $25 – which is still a deal.

So why the rush?

“I want to clean the city before the festival,” he said, referring to the annual Labor Day Festival (which is indeed on for this year).

So, time is ticking.

City Councilmember Cathie Gordon also complained that the city-owned Veterans Memorial Park is overrun with weeds and in general is looking shabby.

We ran into Vennie Valentine at the park on Wednesday. She was at the “playground” next to the old ice skating rink with her three grandsons, swinging on one of two swing sets.

The playground is filled with weeds, and wildflowers, at about two or three feet high.

It’s not what Vennie expected, considering she moved here from Detroit based on Hamtramck’s reputation for cleanliness and police protection.

“This is not what Hamtramck does,” she said. “It’s usually well-kept.”

One Response to City vows to clean up southend blight