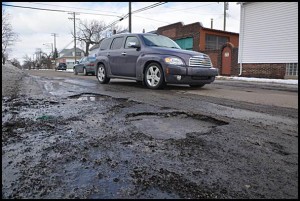 This winter has been especially rough on city streets. A resurfacing program will begin once warmer weather sets in.

By Charles Sercombe
Been doing the Danforth dodge?
The Lumpkin lurch?
The Wyandotte weave?
The Goodson gotcha?
No, we’re not talking about new dance moves. We’re talking about trying to avoid hitting the numerous potholes on every freakin’ street in the city. And on the streets beyond Hamtramck’s borders.
This winter’s extreme cold has created not only more potholes but monster-sized ones at that.
“Hamtown has, hands down, the biggest, widest and deepest potholes anywhere I’ve been,” said Nolan Skipper LaFramboise II, a former business owner here and still a frequent visitor to the city, in a recent posting on his Facebook page.
“Basketballs and tires, with the wheels attached, could disappear in yours,” he added.
The city has been filling the most severe potholes when it can, and weather permitting. But with the constant swings between cold and warmer weather, it’s been hard to keep up, said Steve Shaya, Director of Public Works.
“It’s just been a horrible winter,” Shaya said.
Some of the streets are so bad it appears they need more than patching. Emergency Manager Cathy Square agrees. She said she will have the streets surveyed and begin resurfacing the worst — as soon as warm weather settles in.
“I definitely want to leave the city with a good road repair plan,” she said, in reference to when her employment contract ends on July 1.
There is also talk of the state allocating money to help with repairing roads statewide in light of increasing complaints. According to the U.S. Census, Michigan comes in last on spending money for road repair — at $154 per person.
Colorado spends over $400 per person on roads.
Bad roads aren’t bad for everyone. Tire stores, as you would guess, are thriving.
Over at Sucher Tire on Conant and Davison the phone has been ringing constantly, said Roy Sehller. He confirmed that potholes have “quadrupled” the number of damaged tires.
“It’s bombastic,” he said.
Dave Tulecki of Dave’s Discount Auto on Evaline and Brombach, one of the last neighborhood auto shops left in Hamtramck, said drivers are making the situation worse by not having their tires properly inflated.
Under-inflated tires, he said, allows “the rim to hit the pothole and chop through the tire.”
There is one good thing to say about all the snow. At the very least it fills up the potholes to make driving a little smoother – until it melts.