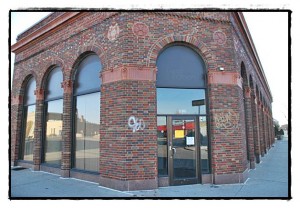 The former DTE building on Jos. Campau and Holmes will soon become an Islamic center and mosque.

“The tough part is where to draw the line.”

That indeed is a difficult dilemma when it comes to zoning laws and the constitutional protection of freedom of religion.

And a little-known federal law with the cumbersome title of Religious Land Use and Institutionalized Person Act.

The above quote is from Jason Friedmann, the city’s Director of Community & Economic Development.

He doesn’t take the right of religious freedom lightly. But, Friedmann is here to bring in development.
Tax-paying development.

The thing with religious institutions — be they churches, mosques, temples or centers — is that they are tax exempt. Also included in that category are non-profit agencies.

In other words, the city does not collect property taxes from them.

In Hamtramck, the city has allowed three religious centers to set up shop on Jos. Campau – the prime business district. The city’s heart and soul.

Last week, the Zoning Board of Appeals allowed two more religious institutions to set up, one on Holbrook, just west of Jos. Campau, at the former Orlikowski Funeral home, and another one on Jos. Campau at the former DTE building at Holmes.

Let’s go back to Jason Friedmann.

Remember, he’s sensitive to our country’s religious freedom. And, he’s also tasked by the city to bring in businesses and tax dollars.

“We want people to practice their religion, but the problem is Jos. Campau is supposed to be our main commercial district – our prime real estate, which generates tax dollars,” Friedmann said.

Businesses generally pay higher taxes than what’s charged to homeowners. They are an important source of the city’s budget.

An organization that pays no taxes gets a free ride.

“It makes it pretty tough for the city to provide services,” Friedmann said about hosting non-tax paying entities.

The federal act was adopted by congress and signed into law by President Bill Clinton in 2000.

Before all of you Clinton haters out there blame it on a liberal agenda, do your research. The law was actually pushed through by Republican lawmakers.

Communities across the country have since complained about the law, but there has yet to be a challenge made that’s reached the Supreme Court.

Sean Kowalski of the city’s Zoning Board of Appeals said that until the law is overturned, the city’s hands are tied.

Kowalski, who is an attorney, said the city could attempt to sidestep the law, sort of, by modifying its zoning law to restrict religious institutions wishing to locate in the business district to do their worshipping on the upper floors of any particular building. Leave the ground floor, he said, strictly for commercial businesses.

There are a dozen or so empty storefronts on Jos. Campau.

“Time is ticking,” Kowalski said for the city to modify its zoning law, or face having more churches, mosques, whatever, setting up shop in the center of the business community.

One Response to City wrestles with balancing religious freedom and zoning