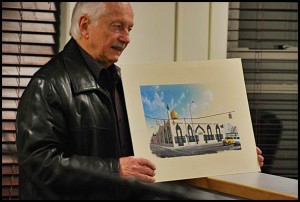 An architect for a proposed Islamic center on the northwest corner of Jos. Campau and Caniff holds up a rendering of what the building that now sits on the corner would look like.

Hamtramck’s development rules are once again being tested by the desire of the city’s Muslim community to open two more mosques.

And mosques seem to be the fastest growing development in the city.

There are currently three mosques clustered in the Jos. Campau-Caniff area, a new one that recently opened on Holbrook in a former funeral home and now another one being planned in a St. Aubin St. building once owned by American Axle.

The two new requests were heard by the city’s Plan Commission on Wednesday evening. The city council chamber was overflowing into the hallway with supporters of the mosques.

Those attending were all men, except for the presence of two women.

The first matter heard was a request to rezone part of an industrial area encompassing the former American Axle plant complex. Investors already purchased a building on St. Aubin and Faber and wish to create an Islamic center there.

But to do that, the Plan Commission would have to agree to allow the building to be used for non-industrial use.

Over a dozen speakers addressed the commission. First up was Susan Dunn, a resident of Hewitt St.

She said she was concerned about increased traffic from the mosque as well as eliminating a building for further potential industrial use.

She also questioned the need for so many mosques in the area – now numbering about a dozen. She said the Muslim community should concentrate the mosques to one or two large ones instead of creating a number of “smaller ones.”

Issam Ali disagreed, saying the mosque will attract new development and people to move into an otherwise vacant area. He also said that companies are not planning on bringing industry back to the area.

“Companies are running away,” Ali said.

He also noted that there is already a Hindu temple just a few blocks away from the proposed center and that there are a number of Christian churches in the city.

“We cannot do double-standard,” Ali said.

Another speaker said the center will not only attract new residents, it will also spur business growth in the southend where empty land now sits.

Fadel noted that the area is now a “ghost town.”

“This is a chance for that area to come back,” he said.

The Plan Commission gave a preliminary OK to allow mixed usage in the area, which would allow the center to operate. However, there must first be a public hearing on the proposal.

The hearing was scheduled for the commission’s next regular meeting on Feb. 13.

If the commission gives its final blessing, the proposal would then move forward for the approval of the city council. 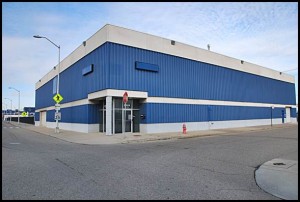 A building formerly owned by American Axle may find new life as an Islamic center. The city’s Plan Commission will have to decide on whether to convert a former industrial section of the city to be used for multiple purposes.

In the second matter, the commission wrestled with a façade design proposal for what would be a new mosque at the northwest corner of Jos. Campau and Caniff, a two story building that had apartments on the top floor and retail space on the bottom.

The Al-Islah Islamic Center purchased the building and plans to move from its current location on Caniff, right around the corner of Jos. Campau.

Last fall, the city’s Zoning Board granted permission to rezone the building from commercial/residential use only to religious use.

That variance in the city’s zoning law was only the first step. In applying for the switch in usage, mosque organizers agreed to abide by the city’s façade design rules, which require the front of the building and the exposed side facing Caniff to have at least 70 percent of its surface be glass.

The final design plan fell short of that requirement, however.

That left commission members at a momentary loss of what to do next. Commissionmember Tom Jankowski, who also sits on the city council, motioned to give a preliminary OK to the plan on the condition the Zoning Board grants another variance on the zoning rules.

The Zoning Commission next meets on Feb. 6.

If the plan goes forward, there will be three mosques on Jos. Campau – the city’s main business district — within a two-block distance.

Religious institutions do not have to pay property taxes. The proliferation of religious centers and subsequent loss of property taxes in the city’s business district has been a growing concern among some city officials.

One Response to City wrestles with mosque developments