City’s financial plan is rolled out to the public 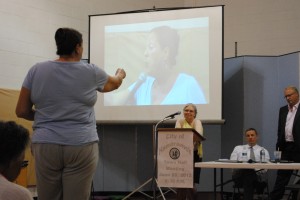 At last Thursday’s (June 28) Town Hall Meeting, much was discussed but little was accomplished.

Called by City Councilmember Robert Zwolak in response to the city’s proposed budget reduction plan, the meeting was a chance to for the public to air their thoughts on the matter in a forum other than a city council meeting. About two dozen residents showed up, though only a few took the opportunity to voice their concerns.

The meeting began with a presentation by Acting City Manager Erik Tungate that outlined the proposed deficit elimination plan. According to Tungate, the plan has four main objectives: Comply with Public Act 140 of 1971, serve as a prerequisite for a state loan, reduce the city budget by $3.5 million, and prevent the city from being taken over by an Emergency Financial Manager.

In order to meet those objectives there are several proposed changes to future budgets. Among those falling into the category of “cuts” are payroll reductions totaling $82,000 (which have already been completed), the trimming of vendor contracts to the sum of $200,000 (in progress), changes to retiree healthcare saving $187,784 per year, the consolidation of departments and a review of council membership dues.

Concessions from the police and firefighter unions would save the most money — $2.1 million — though the proposal still needs formal ratification from both the unions and city council.

Among the ways the city plans to bring in money were several options described by Tungate as “revenue enhancements” and counter-described by the public as “taxes.”

These included a rubbish millage increase, a judgment levy, general administrative fee increases, and a possible street lighting fee. All together, these adjustments would total about $73 per year, or a little over $6 per month, for the average homeowner.

Noting that several other cities have found themselves in similar situations, Tungate then compared Hamtramck’s response to those of similar municipalities. While Ferndale has only increased its taxes by 3 mills for the next five years, cities with unrestricted millage increases like Harper Woods and Hazel Park have increased taxes by 9.5 and 10 mills, respectively. Hazel Park also instituted a street lighting fee.

In his conclusion, Tungate stated that though the task ahead is difficult, the decisions contained within the plan were necessary in order for the city to survive.

“The plan reflects difficult choices but puts the city on a positive long-term path,” he said.

After Tungate’s presentation, residents were invited to offer their opinions on the subject at hand. Only a few were on hand to speak up, though many went back to the microphone multiple times.

Twylla Meyer expressed her disappointment that the cut to Tungate’s salary was, in her opinion, too low.

Susan Dunn agreed with Meyer. She said that the police and fire unions gave far more than 2 percent. Dunn also said her house has lost value and her taxes have gone up, and that the city should focus on helping its residents rather than hurting them with taxes.

“You need to start working on other things while we’re still here,” she said.

Bill Meyer thanked the hosts for putting on the event but said that he felt it was pointless because nothing would come out of the meeting and the plan would move forward regardless.

“Why are we doing this? It seems a little redundant to me,” he said. “We should all just go home now.”

Beatrice Woods gave a history lesson on the city before she was asked by Tungate if she had a question. She responded by saying the city council doesn’t know how to treat people courteously and doesn’t answer questions. She later asked why there weren’t more people of color working for the city.

“What happened to the City Manager’s secretary?” she said.

A woman named Bonnie said that her taxes were too high, the presentation went a little quick and she wished there was something to follow along with. Tungate said that everything was online, to which Bonnie responded that he assumed she had access to the Internet.

“The city should provide Internet access to all its residents,” she said.

Hillary Cherry gave an informative speech on the city and its current lack of continuity and institutional memory. She said the city has been in similar situations before, and that volunteers do a lot of work in other cities to help defray costs. When Mayor Karen Majewski said the city had worked on a volunteer list before, Cherry informed her what happened to it.

“I was working on that very project before I was banned from the police station by the city manager,” she said.