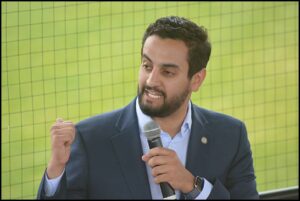 By Charles Sercombe
Some history was made as a result of the Nov. 8 election.
For the first time in 40 years, Democrats won majorities in both the state’s House and Senate.
That means Gov. Gretchen Whitmer, also a Democrat, will have a much-more cooperative legislature to work with.
The Democratic majority in the state legislature also means a change in leadership in both the House and Senate.
Hamtramck’s own State Rep. Abraham Aiyash was chosen by his colleagues to be the House majority floor leader.
It will be his job to coordinate and schedule legislative plans, as well as keep taking the pulse on what his party members think about the issues being considered.
Aiyash is the first Muslim to hold this position. This is Aiyash’s second term. He ran in a newly drawn district, District 9, and won decisively over his Republican challenger.
The Review reached out to Aiyash for comment, but he did not reply.
Aiyash represents the growing political power of Muslims in Hamtramck, who now also control Hamtramck’s government. The city had been a Polish enclave for several generations.
The city’s Muslim community also captured another first by electing a Yemeni-American as mayor – who ousted former Mayor Karen Majewski in her re-election bid last year.
It appears that Majewski could be the last Polish-American to be Hamtramck’s mayor. Many Hamtramck Poles have long ago moved to the northern suburbs of Warren and Sterling Heights.
There is another Hamtramck connection to the position of Democratic House floor majority leader: former City Manager Kathy Angerer was the first female to hold that position – although, at the time she was in the state legislature, she did not represent a district that included Hamtramck.
Aiyash is the son of Yemeni immigrant parents, and a graduate of Hamtramck High School. His sister, Jihan Aiyash is a member of the Hamtramck Public School Board.
Hamtramck’s last resident to serve as a state representative was Chester Wozniak (who was also a Democrat). He served in the 1950s, and then made a surprise return for one term in 1991-1992.
Wozniak died in 2009, at the age of 87.
Posted Nov. 18, 2022