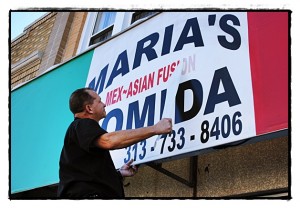 Hamtramck’s one and only Mexican restaurant is expanding its cuisine.

Maria’s Comida is now featuring a Mex-Asian menu and by the looks of things, it’s a hit.

“It’s to die for,” said an obviously very pleased Phil Grote, who we ran into on Wednesday afternoon at the restaurant.

So, what’s with the changeup?

Co-owner Marie Pronko said that after almost three years in business, it was time for a change and hopefully attract a wider customer base.

Let’s face it, you can get Mexican fare anywhere these days.

Actually the seed of change was planted a few months ago when Asian-styled dishes were tried out.

“People responded to them,” Pronko said.

Marie and her father and brother, who do most of the cooking, brainstormed and came up with a brand new menu. Oh, you can still get plenty of Mexican here, but now there is also fresh salmon, a smoked chorizo spaghetti (very tasty and with some nice spicy heat) and Asian flank steak, just to name a few new additions.

For lunch, you can grab their special wraps: Sweet and Spicy Chicken, Mongolian Beef, Kung Pao Chicken or Singapore Street Noodle (add chicken or shrimp for just a buck more).

The Pronko family also redid the interior to better suit the new international fare. They are also incorporating as many local items as they can. So far, the spicy chorizo is smoked for them by Srodek’s, and the flowers are supplied by Flowers By Deb.