Coming soon to Hamtramck: A bike path to downtown and beyond 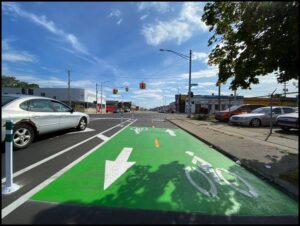 A bike path on Jos. Campau that stops at Carpenter will be coming into Hamtramck sometime next year. One sticking point is what to do with it when Campau narrows south of Caniff.

By Charles Sercombe
That new bike lane you see on Jos. Campau between Carpenter and 6 Mile will, indeed, extend into Hamtramck.
It’s just a matter of how it will cut through the city, said City Manager Kathy Angerer.
While Jos. Campau is wide enough going south from Carpenter to Caniff, past that intersection there’s a bump in the road, so to speak.
That bump is what to do with the bike lane as it continues south of Caniff, where Campau becomes much narrower.
There are a couple of options: slim the lane down greatly, or wind it through an alley running adjacent to Campau.
Since the street is owned by Wayne County, it will be the county’s final design decision going forward.
In total, the path is over 27 miles that is set aside for biking and walking, and it extends from downtown Detroit’s Dequindre Cut, up to Highland Park, then Hamtramck. It also spikes west to Dearborn.
The bike path is being called in honor of Detroit boxing legend, Joe Louis — the Joe Louis Greenway.
Funding comes from a variety of sources that include state grants and grants from non-profit organizations.
Adding to the delay in completing the project has been the onset of COVID-19 – which derailed a number of projects and developments this year.
Final plans for Hamtramck’s portion of the trail will be decided over the winter, and work on the lane is expected to pick up in spring.
When it’s completed the folks at Detroit Greenways Coalition say on their website:
“… It will provide a place for people of all abilities to safely walk, bike, and run while connecting neighborhoods, parks, schools, jobs, historic sites, commercial corridors and public transit.”
Hamtramck city officials have entertained the thought of creating a bike path for at least 15 years, but they never managed to get the project moving forward.
Posted Dec. 11, 2020