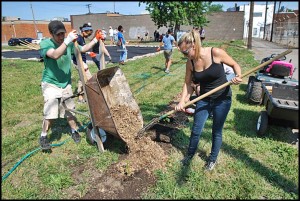 The city-owned lots where Hamtown Farms is located on Lumpkin St. will be auctioned off in the coming weeks. Organizers of the community garden are seeking donations in order to save the project.

“They paved paradise to put up a parking lot.”

The Hamtown Farms will not be turned into a parking lot.

The community farm project came under threat this week when Kowalski Sausage Co. offered to buy the five city-owned lots that comprise the gardens for $3,000.

An immediate outcry of protest and outrage from farm supporters went out over the social media network and was picked up by television news stations. Farm organizer Mike Davis urged supporters to call Hamtramck Emergency Manager Cathy Square.

The calls came in, said Square, and by Wednesday the deal was dead.

“This was too much aggravation,” Square told The Review about the number of calls.

It was originally thought that Kowalski wanted the lots as a “buffer zone” or possibly to convert them into a parking lot. Square said Kowalski actually is interested in expanding its plant, something that’s been in the works for the past few years.

Kowalski at one point was going to move its operation out of the city, but city officials worked hard to persuade the company to stay in Hamtramck, either by expanding the existing Holbrook building or building new within the city limits.

Square said the company has 11 lots near its plant now.

Kowalski could still grab the five lots where the garden is. Square is putting all city-owned lots up for auction within the next few weeks.

The lots will go to the highest bidder, meaning that the Hamtown Farms could be taken away.

Davis said he’s up for the auction.

“We’ve never asked for anything free,” he said.

He also added that the Farms just received a considerable donation, and there is now an online fundraising effort at www.indiegogo.com. Once you’re on the site, look up Hamtown Farms.

A call to Kowalski was not returned.

To Sharon Buttry, a local activist, she can’t imagine a Hamtramck without the community garden.

“What kind of Hamtramck will we have without vibrant gardens and farms to engage neighbors (especially youth!) and bring fresh food to our tables?” she said on her Facebook page. “Will people want to live in a city that discourages community pride and health?”

2 Responses to Community garden project going to the auction block