Community leaders meet to get the word out for Census 2020 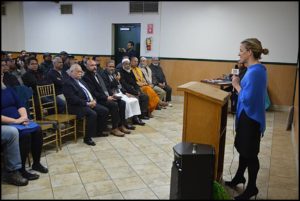 Michigan Secretary of State Jocelyn Benson addresses a gathering last Sunday at Gates of Columbus Hall about the upcoming census count in 2020. The event was sponsored by the Michigan Bangladeshi-American Democratic Caucus.

By Charles Sercombe
Michigan Secretary of State Jocelyn Benson told a gathering at Hamtramck’s Gates of Columbus Hall that the upcoming national census count is going to be a “historic” moment.
“Be counted,” she told a packed meeting room of mostly Bengali community members, “so we can get money and resources.”
“We have a lot of work ahead of us.”
For every person counted, it is said to equal $1,800 per person in federal funding that then goes to many different projects, such as road repairs.
The meeting, hosted by the Michigan Bangladeshi-American Democratic Caucus last Sunday, focused on the upcoming census, which takes place this coming March, but also at moments felt like a campaign rally.
Several local and state officials spoke at the meeting.
Congressional districts are drawn up based on each state’s population.
That was a point that Michelle Oberholtzer, a community activist, stressed.
“It’s not just money, it’s votes in congress,” she said.
The Trump administration has severely cut the operating budget for the census, which is mandated by the Constitution to occur one every 10 years.
Like many immigrant-rich cities, Hamtramck has a challenge ahead.
That’s because some of the new immigrants, fear that their information can be used against them by the government.
“There is a lot of misunderstanding out there – a lot of fear,” said Kevin Hrit, a Regional Director for U.S. Senator Gary Peters.
Hrit also cautioned that there are some politicians in Washington D.C. who, for political reasons, don’t want to see an accurate count.
“The census is about your community,” said Hrit.
Speakers at the meeting repeatedly reminded those present that, by law, information gathered by the census can not be shared with any government agency.
City Councilmember Saad Almasmari, who recently lost his bid for re-election, estimates that Hamtramck has been undercounted in past census efforts by as many as 10,000 people.
After the 2010 Census count, Hamtramck’s population was listed as 22,423 – down by about 1,000 from the 2000 count.
Ten years ago, there was little organization to rally the community for that census. But this time around, things are different.
The city has formally organized the Complete Count Committee to make sure the city does get nearly every person counted.
Virginia Skrzyniarz, who is the chairperson of the committee, told The Review earlier that the committee will “work seriously in engaging the ethnic communities.”
This year’s census is unique because, for the first time, residents can participate through the internet.
Besides cutting back on funding for the census, the Trump administration attempted to get a question included that would have asked whether one is a citizen or not.
Critics said the question would likely scare off some immigrants, who would fear it would lead to deportation.
That question has since been struck from the census form, but there could still be lingering doubts for some people.
“We hope to convince people they will not be deported,” said Skrzyniarz.
Anyone who would like to join Hamtramck’s census committee can do so by calling (313) 733-4535.
Dec. 13, 2019