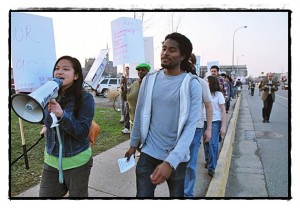 “We need to stand together tonight in defiance,” said Mayor Karen Majewski at a gathering of about 200 people last Friday evening.

And defiance indeed was in the air.

The outpouring was in response to the horrible violence done to six women within a one week period recently.
Friday’s get-together was also the result of planning by a new group called “Take Back the Night Hamtramck.”

Friday’s event started at the corner of Jos. Campau and Holbrook, and the gathering then walked a few blocks south and stopped for a brief moment of silence in the Checker’s restaurant parking lot, across from the Painted Lady Lounge, where a few weeks ago four women were carjacked after leaving the Jacob St. bar. 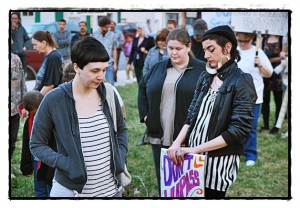 One of the women escaped before their abductor, holding a gun, ordered the three remaining women to drive away.

The women were later repeatedly sexually assaulted. The gunman was eventually arrested later that night after police managed to close in.

The group then walked a few more blocks down and stopped at Andrus St. where a few days prior to the carjacking two women were kidnapped during a gun battle at their house, and were then stuffed into a trunk of a car. They have not been found since.

Two suspects are being held in their disappearance. The women are believed to be dead.

During the walk, two drummers kept time with a march beat. Many in the crowd held hand-made signs. Some said:

“Like a good neighbor, Hamtramck is there”
“We are family”
“Stop violence. Spread peace”
“Take back our streets”
“Hamtramck cares”

As they walked, some in the crowd chanted; “No more violence! No more hate! Women unite! Take back the night!”

Also walking with the men and women were three firefighters, who were followed by fellow firefighters driving two ladder trucks and an ambulance.

By the look of many, it was an emotional walk. Some in the crowd knew the women who had been carjacked and assaulted. There were also family members of the two women missing.

As the crowd returned to the corner of Jos. Campau and Holbrook, no one seemed to want to leave. The crowd remained for about 15 minutes, some still chanting.

One of the event’s organizers, Nadine Gizak, said the turnout was better than she thought it would be.
“It was a wonderful show of support from the community,” Gizak said.”That is why I love Hamtramck. I still feel awestruck.”

As for future events, Gizak said there are several in the planning stages.

“A lot of residents want to march in the neighborhoods — quietly and on a smaller scale. We are starting with the Senior Plaza Block Club members. … Also, there is talk of a women’s pride bar crawl,” she said. 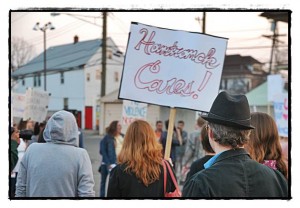