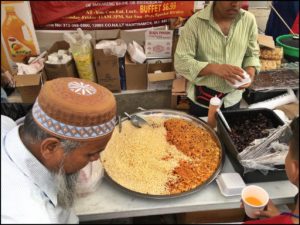 The annual Hamtramck Diversity Festival this past weekend celebrated the Bengali community, which has plenty to cheer about lately.

By Walter Wasacz
Walking through the Bangladeshi festival — which last weekend celebrated its 20th year holding this event — brought back memories.
I was there for that first one, in 2000. It was a time of impressive growth for the local South Asian community, which began to invest in commercial and residential properties along the Conant Avenue corridor, in both Hamtramck and nearby Detroit neighborhoods in the 1990s.
A quick factoid to ponder: though most of the commercial activity rapidly shifted to Conant, the first shops and restaurants were on Caniff west of Jos. Campau.
The entrepreneurial Ahmed brothers opened the original Bengal Spices market in a storefront on Caniff between Fleming and Lumpkin; then across the street and down the block they opened Hamtramck’s first Indian/Bangladeshi restaurant, Taj Mahal, in the former PRCU (Polish Roman Catholic Union) hall. The same building now houses Ant Hall and Ghost Light Bar.
Shahab Ahmed, the youngest brother, entered politics and won a seat on the city council, becoming the city’s first Muslim elected official. He earlier became involved in community life when he started the Caniff Avenue Improvement Project, bringing attention to an artery connecting I-75 with the central business district.
It was also in 2000 that I traveled to New York City to meet sociology professor Roger Sanjek of Queens College, who was tracking migration patterns and trends in the Elmhurst-Corona neighborhood of that borough. 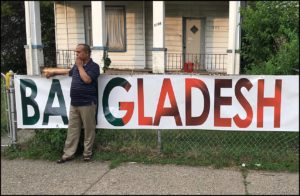 He took me on a walking tour that included stops in Jackson Heights, where a fair number of new South Asian transplants to Hamtramck and Detroit had first lived after arriving from Bangladesh.
His book, “The Future of Us All – Race and Neighborhood Politics in New York City,” offered a glimpse of urban America to come in the new century. From the 1960s to 1990s Queens went from a majority white European population to a multiracial mix of people with origins in nearly every corner of the world, including Africa, Central and South America, the Middle East, and South, Central and East Asia.

There were clear parallels, albeit on a smaller scale, to changes occurring in Hamtramck, once a majority Polish American city from the early 20th century to roughly the 1970s/1980s (once reaching over 80 percent of the resident population, current numbers stand at less than 10 percent claiming Polish ancestry.
My reporting appeared in The Citizen, which no longer publishes but remains archived in bound editions at the Hamtramck Public Library and the Hamtramck Historical Museum.
Anyone interested in these articles can ask to see the 2000 edition at those two locations. Unfortunately, there is no digital archive available.
As I walked up and down Conant last Saturday, I imagined the future of this vital corridor, now the focus of an ambitious development project by the City of Detroit.
Wide-ranging plans include the rehabilitation of buildings on Conant, Dequindre and the former Transfiguration school building near Mound.
American Axle is putting $5 million toward the neighborhood plan and a Bingham Farms-based housing development company is proposing the construction of a $17 million, 50-unit apartment building on the northeast corner of Carpenter and Charest.
Streetscape Improvements are planned for the Conant business district, which extends on the Detroit side of the avenue from just north of Harold to Davison. It’s unknown what Hamtramck’s contribution to the streetscape will be on the west side of Conant.
Also unknown is how the departure of influential chief City of Detroit planner Maurice Cox, who is leaving for a similar posting in Chicago, will affect the plans for Banglatown.
Cox was an advocate of the “20 minute neighborhood,” where people can walk or bike to get basic needs met within that time frame. He expanded the number of planners employed by the city from around six to 36 in five years.
It’s not accidental that redevelopment projects are underway in several Detroit neighborhoods: there is a lot of talent behind the increased activity.
Some Banglatown improvements high on the list to consider would be bike lanes, curb and crosswalk improvements and traffic calming strategies to increase pedestrian activity and safer streets. Facade enhancements to existing businesses, and business recruitment and retention should also be on the list.
It also wouldn’t hurt to create budgets for PR and marketing the region’s most concentrated Bangladeshi community. It is far too insular for a neighborhood and business district so unique.
When Conant throws a weekend party everyone in metro Detroit — over 5 million people live within a 50-mile radius — should be invited, the streets packed with visitors from near and far.
Let’s keep our eyes on the future and see what comes in the years ahead. I sure will.
Walter Wasacz’s walkable discovery column appears twice monthly in The Review.
Aug. 2, 2019