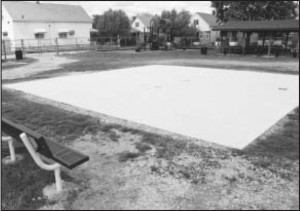 Finally, someone has spoken up about the Recreation Department’s splash pad that is about to be opened.

In the most recent School Board meeting, Recreation Director Craig Daniels read an email sent from a representative of the company that installed the pad. The Review obtained a copy of the email through a Freedom of Information Act Request.

Daniels has refused to talk with this newspaper about any aspect of the pad and why it cost at least twice as much per square foot when compared to other communities’ pads.

The Review compared Hamtramck’s 900-square-foot pad with the cost of other communities.

According to Matt Campanella of Sinclair Recreation, he said there is no way to compare the cost of Hamtramck’s pad with other communities unless it’s compared to another 900-square-foot pad.

“All of the comparisons in the newspaper were apples to oranges comparisons,” said Campanella in the email.
The Review’s comparisons did note the size difference in the pads of other communities and the fact that Hamtramck’s pad required more expensive machinery because it recycles the water is uses.

But again, The Review did try to get Daniels to explain the cost of the pad, but not only did he refuse to discuss it, he also hung up his phone while talking with a reporter.

School Boardmember Hedy Shulgon has also been trying to get her questions about the pad answered but also hit a brick wall with Daniels. The pad cost Hamtramck taxpayers $115,853.

Shulgon said she became concerned about the pad when she found out that the state Department of Environmental Quality was concerned that the proposal for the pad had not been submitted for review and approval.

At the time of the DEQ’s inquiry last December, the pad had already been built. An inspector with the DEQ, Paul Sisson, said that without first inspecting the plans for the pad, there could be modifications needed.

He said that the scope of the modifications could include redoing much of the installation. Sisson has since said that the plans that were recently submitted seem to be in order and that he planned to inspect the pad on Thursday (June 3).
“I don’t really expect there to be a problem with it,” Sisson said.

Still, it has not been answered why Daniels or the contractor hired to install the pad failed to first get an OK from the DEQ before construction began.

It’s also still not known why Daniels selected the more expensive recycled water version of a pad instead of using a system that allows the water to simply run off.

Most communities surveyed by The Review opted to use a pad system that allows water to drain off. Recycled water also poses potential health safety issues.

Recycled water needs to be treated much like pool water and must be monitored to make sure bacteria doesn’t get recycled with the water.

The pad, located in Pulaski Park, is scheduled to be opened within the next two weeks.