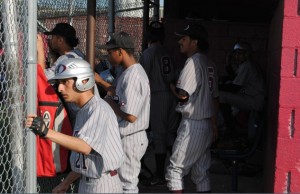 With the season winding to a close, the Cosmos baseball team is closing in on their goal of a .500 season.

Two weeks ago (May 15), the team won the Highland Park Tournament, a round-robin competition with four teams. After two of the teams in the contest forfeited, the Cosmos lost a tough game against Highland Park by a score of 5-4 before ultimately winning the championship game.

In the title game, the Cosmos played Pontiac Academy for Excellence. Luckily for Hamtramck, Pontiac Academy didn’t live up to its moniker of “excellence” and instead settled for being mediocre. Going into the fifth inning, sophomore pitcher Jarkkari Bonner had already struck-out nine batters and was heading for a one-hitter when the Eagles decided to take flight by walking off the field and abandoning the game.

Fortunately, nothing like that would happen to Hamtramck. According to Head Coach Carl Norman, the group of players that comprise this year’s Cosmos are very disciplined and have a great attitude.

“Overall this is one of the better teams that I’ve coached,” he said. “The kids have their hearts in the game and there’s never a dull moment.”

On Wednesday (May 26), the Cosmos also played a game at Oak Park. Unfortunately, the game was lost by a score of 9-4.

A game against Redford High was also played on Thursday but the results were unavailable at press time. The team’s next game is next Saturday (June 5) when the Cosmos begin playing in the District Tournament. Their first game is at noon against Crockett High.