Cosmos basketball legend now has a new home: The Hall of Fame 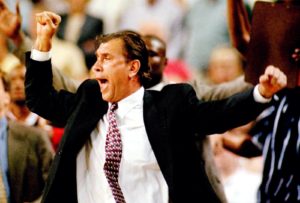 Hamtramck’s own Rudy Tomjanovich has been accepted into the Basketball Ball Hall of Fame.

By Alan Madlane
Rudy Tomjanovich finally got in.
Tomjanovich, an NBA star player and coach, and pride of Hamtramck – having been born and raised here – was voted into the NBA Hall of Fame on his third time as a finalist for the nomination.
“Rudy T,” as he is affectionally known, starred at Hamtramck High and the University of Michigan, before embarking on an illustrious pro career for the San Diego, later Houston, Rockets.
He played his entire career for the Rockets, a career cut short by a vicious sucker punch by Los Angeles Lakers player Kermit Washington during a game in late 1977.
The infamous incident, about which at least one book has been written (“The Punch: One Night, Two Lives, and the Fight That Changed Basketball Forever” by sports analyst John Feinstein), shattered Tomjanovich’s face, briefly imperiled his life, and ultimately shortened his playing career.
But Tomjanovich would not go quietly. He would, instead, embark upon a coaching career that managed to eclipse his playing one.
It would be as a coach that he would be enshrined in the Hall, alongside the late Kobe Bryant, stars Tim Duncan and Kevin Garnett, college coach Eddie Sutton, female player Tamika Catchings and coaching legends Kim Mulkey and Barbara Stevens, and international exec Patrick Baumann.
And it was once again for his cherished Rockets, primarily.
The team would win back-to-back championships in 1994 and 1995, in Rudy T’s second and third full seasons as skipper.
Known as a “player’s coach,” stars such as Charles Barkley, Clyde Drexler and Scottie Pippen would all request trades to Houston to play for him. So intense was his and his staff’s game preparations, that he was hospitalized more than once with exhaustion.
Tomjanovich would also go on to steer an American team — sans any stars, in those days – to a bronze medal in the 1998 FIBA World Championship.
He eventually retired from a brief comeback stint as coach for, ironically, the Lakers, in 2004. But this time, the exhaustion proved to be the end of his career.
Today the 71-year-old lives in Austin, Texas with his wife. They had three children together.
And this year, he gets a second home: the Hall of Fame.
The honor, he said, was “a godsend” for him, given the present times, and gave him “a wonderful feeling.”
Well done, Rudy T.
Posted April 17, 2020