Cosmos basketball season starts off with a big win 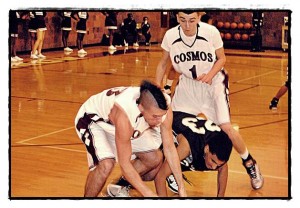 The Hamtramck High boys’ basketball team is undefeated – so far. They won their first game of the season on Tuesday (Dec. 7) night.

It was a resounding victory for the Cosmos, who beat crosstown rival Frontier Academy by a score of 76-46 in front of a packed crowd. Though the score seems like a blowout, Hamtramck’s Head Coach Mark Nezich said that while he was pleased to win the game, there was still room to improve.

“Overall we did some good things,” he said, “but we did more bad things than I would have liked to see. First games are always sloppy and [Tuesday] night was nothing new.”

However, Nezich did credit his team on two big improvements from last year. The first involves rebounding, which he says the Cosmos did a phenomenal job of doing against the Knights. Incredibly, the team ended the game with an outstanding total of 50 rebounds.

“I was happy to see at least three white shirts hitting the boards almost every possession on both ends of the floor,” said Nezich.

The second, and most important according to Nezich, was that the Cosmos played like a team. Nezich commended the camaraderie of this year’s players, saying that even those on the bench were able to get involved in the game by cheering their teammates on when they did something good.

Hamtramck’s next home game is tonight (Dec. 10) at 7 p.m. against Oxford. But if you’d rather see them in a more appropriate arena, the Cosmos will be playing a game at the Palace of Auburn Hills on Wednesday, Dec. 29 at 4 p.m. before the Pistons vs. Celtics game. Tickets to see the Cosmos as well as the Pistons are just $50 and can be purchased at the high school through Mark Nezich or Toni Coral. The ticket also includes a free T-shirt.