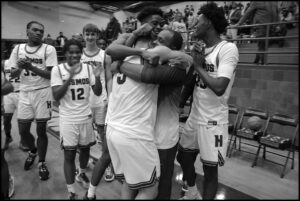 By Brian Anderson
HPS Athletic Director
For the first time since the mid-1980s, the Hamtramck Cosmos boys basketball team won a District Championship.
The team was on its way to taking it all in state competition. They got close.
The Cosmos magical season ended on Wednesday night. The Cosmos lost to number-one ranked Orchard Lake St. Mary’s, 83-72, in a regional final played at Detroit Renaissance.
In spite of the loss, the Cosmos received 25 points from Robert Davis Jr., while Hershel Marion had 14 points and 9 rebounds, and Amari and Aaron Allen had 12 points apiece. 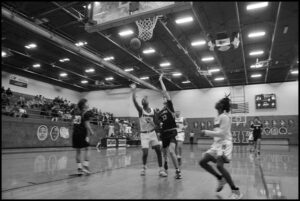 To get to the Regional Final, the Cosmos defeated number-four ranked in the state University of Detroit Jesuit, 61-48, on Monday. Davis had 23 points, while Aaron Allen scored 17, and Hershel Marion had 10 points, 6 assists and 6 rebounds.
Prior to that, the Cosmos defeated Grosse Pointe South on Friday, March 11, to win the District Championship. Davis scored 26 points, while Aaron Allen had 10 points and 10 rebounds. This was the first district championship won by Hamtramck since 1985.

While the season was brought to a close Wednesday night, it was certainly a successful one. The team won its 2nd league championship in a row, won its first district title in 37 years, and finished with 20 wins overall, leading to a Top-10 ranking in the state of Michigan.
Posted March 18, 2022