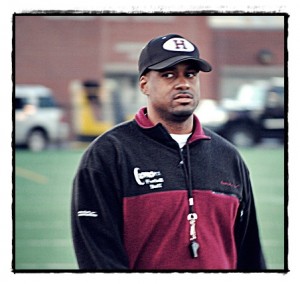 So who is the new coach of the Cosmos?

Wells is a 1997 graduate of Hamtramck High and currently works for the Hamtramck Odyssey Project for Excellence (HOPE) program. He went to college for Secondary Education at Wayne State University, where he played defensive end on the football team and was a four-year starter. According to biographical information compiled for members of WSU’s All-Decade Team by the school’s newspaper The Examiner, Wells was nicknamed “Mr. Mean” and was named to the First Team All-GLIAC in 2005 after being selected to the Second Team in the three previous seasons.

Before becoming a coach, he played with the Peoria Roughriders of the United Indoor Football League in 2006 and with the Kalamazoo Explosion of the Continental Indoor Football League in 2007.
But long before that he was just a Cosmo, so it’s only appropriate that he’s made his way back to Hamtramck. And if his past experience with the team is any indication of where it’s heading in the future, the city could become a football town once again.

“I played on the last championship team at Hamtramck in 1995,” says Wells, “and my goal is to get the program back to that level.”