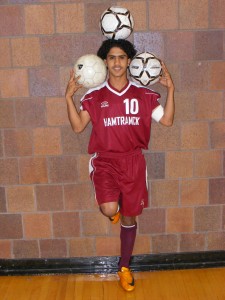 But after a remarkable District Tournament run that saw the team outscore their opponents 14-1, the Cosmos were narrowly defeated 1-0 by a golden goal in overtime.

The loss was perhaps the low point of an otherwise terrific season. The varsity team finished with an impressive 8-6-1 record, scoring 53 goals to their opponents’ 26 — not bad for a group of kids barely old enough to drive. Top goal scorer Awad Almaisari contributed 23 goals and racked up a hat trick in two games.

While the Cosmos played terrifically this season, next year promises to be even more exciting. Because the team will only lose five seniors to graduation, it will remain largely intact. Additionally, about a dozen players from Kosciuszko Middle School’s soccer team, which was this year’s champion of the Dearborn League, have already committed to joining the Cosmos.

“The young talent we have in the soccer program is amazing,” said Hamtramck’s Athletic Director Adam Mused. “They live, breathe and eat soccer. And the team is a microcosm of the city. They may be from different countries but on the field they all speak the same language.”

For those who weren’t following the team throughout the season, here are some final statistics: