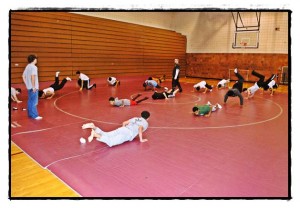 It may be the world’s oldest sport, but this year’s Cosmos wrestlers are relatively young and inexperienced. No matter – they’re always up for a challenge.

Although the first match of the season isn’t until Dec. 2, when Hamtramck goes on the road to take on Warren Lincoln High School, the team has already been hard at work practicing over the last month. Each day after school, the team meets for three hours, with the first hour devoted to homework and studying and the last two to conditioning and technique.

This year’s squad of 31 is led by Head Coach Adam Mused, a Hamtramck High School (HHS) graduate who wrestled as a student. He is assisted by Jason Sernick and Pawel Aftyka – two HHS graduates and teammates of Mused’s who recently returned from tours of duty as marines – as well as Kyle Liechty, a coach from last year.

At a preseason scrimmage event last weekend at Hazel Park, the team was able to walk away with a respectable win-loss-tie record of 17-9-2. If it’s any indication of where the season is headed, it’s a good sign – especially for such an inexperienced team.

“They’re young” says Mused, “but there are flashes of athleticism. If they work hard they’ll do well this year.”