Cost of unplugging sewer backups will be shared by everyone 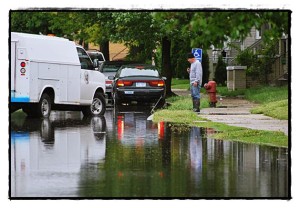 Heavy rains in Hamtramck have sometimes caused massive floodings in household basements throughout the city. There is now a plan in place to fix the problem, but it will cost a lot of money.

By Charles Sercombe
Like the thought of not having to worry about your basement flooding when it rains heavy?
If so, be prepared to pay for it.
After two years of study, city officials heard back from Hennessey Engineering that it will be anywhere from $10 million to $28 million to fix the problem.
John Hennessey, the Vice President of the company, said the cost of the repairs could range anywhere from $5 to $17 per month increase in water and sewer bills.
That would also include the city receiving various grants to help subsidize the work.
Without the repairs, the households can expect further basement floodings. Hamtramck experienced two major floodings in 2008 and 2011 that lead to hundreds of residents claiming damages.
Residents filed a class action lawsuit against the city, which then resulted in a temporary property tax increase to pay for a settlement.
It seems that either way, property owners will be paying.
The city’s flooding problem stems back to the 1950s when a new sewer line was installed along Conant, which ironically was put in place primarily for Hamtramck to keep up with its increased water and sewer usage.
However, to complete a tie-in with Hamtramck’s sewer lines, residents had to approve a temporary tax millage to pay for it.
Guess what?
Voters turned it down.
The city not only has to tap into this main sewer line but also slip in a liner in some city lines that have cracked open.
The city council unanimously agreed to go ahead with repairs, knowing that it has committed the city to completing the repair work with or without a grant.
Hennessey told the council that he is confident that Hamtramck will land on top of any list that the state uses to consider which cities will be given a grant. The city had until this past Tuesday to meet the deadline for consideration of a grant.
Hamtramck previously won a $900,000 grant to perform the engineering study to determine what the problem is and how to fix it.
The first step of the repair project will take three to five years.
In Hennessey’s presentation to the council last week, he noted that 20 percent of the city’s households have downspouts that tie in directly with sewer lines, which adds to the flooding problem.
Mayor Karen Majewski said the city should require all downspouts to empty into lawns.