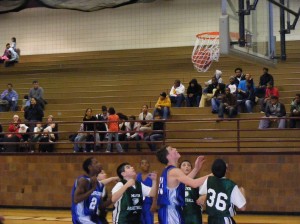 By Ian Perrotta
Review Staffwriter
Last Tuesday (Nov. 24) the Kosciuszko Middle School boys’ basketball team played its first game of the season at Dearborn Academy. The team won the game 42-24 and set the pace for what promises to be an exciting season.
“It’s a new league, and while I haven’t seen the other teams play I expect us to do well regardless,” says Head Coach Phillip Anderson. “We have a great team and I have high expectations for the season.”
Those high expectations were met on Tuesday when the Cougars devoured the Muslim American Youth Academy (MAYA) Spiders. The team outscored the competition 34-15 and played so well the whole team was able to rotate in the game and get playing time.
“It’s nice when all the players have a chance to get in the game,” said Anderson, adding that the team retained its sportsmanship by not running up the score.
The team also played a game yesterday (Dec. 3) against cross-town rivals Frontier Academy, but results were not available at press time. Their next game is at home against Universal on Dec. 8 at the Hamtramck Community Center. Tipoff is at 4:30 p.m.
Last year the team of 7th and 8th graders went 12-2 for the season and 3-0 in the playoffs. This year the team is in a new league (the Dearborn League) but hopes to be up to its old tricks. Returning starter Dominique Wilson, transfer Jahwarn Heron (who won’t be eligible until after the fourth game due to MHSAA guidelines) and Haris Causevic are expected to be top performers for the season.
Don’t count the rest of the team out, though. In the quest for a championship every player contributes. Based on the level of intensity at recent practices, it’s safe to say the team is a balance of raw talent and game-time experience, and their presence in the Dearborn League will surely be felt.
2009-10 Kosciuszko Boys’ Basketball
11/24 away The Dearborn Academy W 42-24
12/1 home MAYA W 34-15
12/3 home Frontier Academy*
12/8 home Universal
12/15 home Bridge Academy*
12/17 away Riverside
1/5 away Central
1/7 away Creative Montessori
1/14 home The Dearborn Academy
1/19 home Universal
*= cross- town rivalry