Council comes around to allowing medical marijuana sales, sort of 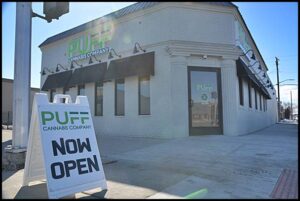 Puff Cannabis Company on Jos. Campau and Commor is the third dispensary to open in Hamtramck. A majority of the Hamtramck Common Council recently adopted an ordinance that reversed a prior decision to ban medical marijuana sales.

By Charles Sercombe
Recently, a majority of city councilmembers rejected allowing the sale of medical marijuana in Hamtramck.
But then a curious turn of events happened.
A few weeks after rejecting a proposal to allow medical marijuana sales, which had been proposed by Councilmember Ian Perrotta, Councilmembers Fadel Al-Marsoumi, Mohammed Hassan, Nayeem Choudhury and Mohammed Alsomiri (Councilmember Saad Almasmari was absent) did an about-face and allowed it, in a new city ordinance regulating marijuana dispensaries.
So did they know that permission was included in the ordinance that they passed?
Apparently, maybe.
“I don’t know what happened,” admitted Councilmember Alsomiri.
Councilmember Hassan said he allowed it because he was tired of the ongoing debate about whether to allow legal marijuana sales to happen in Hamtramck.
“How many more headaches do you want to take?” Hassan said.
Apparently, he may be asking for more. In a cryptic comment, he followed up saying: “There will be changes coming next year.”
He declined to elaborate. But next year is an election year for three council seats (Perrotta, Al-Marsoumi and Almasmari) and the mayor’s position.
Councilmember Choudhury said that, when he initially voted against allowing medical marijuana sales, he did “not fully understand” the issue.
Hamtramck voters voted in favor of allowing medical marijuana to become legal when it was proposed a few years ago, but voters here drew a line on legalizing recreational marijuana.
Members of the Bengali and Yemeni communities have been strongly opposed to allowing recreational or medical sales to happen in Hamtramck, but four dispensaries managed to get their state permits in order before the council adopted a ban on allowing any more to open.
Choudhury said that since recreational sales outlets have opened, it makes no difference to allow medical sales to be offered at those dispensaries.
“For the folks who need it, it will be helpful,” Choudhury said.
He added that personally, he is not against the sale of marijuana.
“I was representing the folks who didn’t want it,” Choudhury said.
Councilmember Alsomiri also said he personally “doesn’t care,” be he, too, felt compelled to follow the wishes of those who oppose it.
“It’s the same as a liquor store,” he said. “Everybody uses it.”
So, what’s the big deal about allowing medical marijuana sales?
Not much.
Having a medical marijuana card allows people to forego paying a 10 percent excise tax – so there is a little break there.
But as one attorney knowledgeable about the marijuana business pointed out, there is nothing stopping dispensaries from voluntarily offering discounts to those with medical cards.
Posted Feb. 26, 2021