Council does about-face on state loan 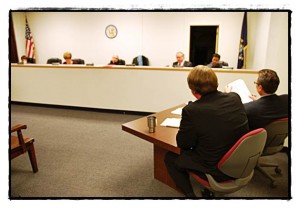 After weeks of haggling and passionate debate, the City Council agreed to apply for a $2.5 million emergency state loan in a special council meeting Wednesday evening.

But that decision didn’t come easy.

All councilmembers voted for the loan, except for Mohammed Hassan and Shahab Ahmed, who were absent.

At first it didn’t look like the loan stood a chance. A motion made by Councilmember Catrina Stackpoole, after about an hour’s worth of discussion, to apply for the loan failed to receive a motion of support, meaning it didn’t even come to a vote.

But what happened in the few minutes after that motion to change the minds of Councilmembers Cathie Gordon, Kazi Miah and Tom Jankowski is a mystery. The loan went through after Councilmember Jankowski did an about-face and motioned to apply for the loan, which brought in the other holdouts on council.

Councilmember Gordon questioned the need to seek $2.5 million as opposed to just $1 million. City Manager Bill Cooper explained several times that $1 million would only see the city through the end of this fiscal year, which ends June 30.

He said that $2.5 million would keep the city afloat through 2012, when it is by that time hoped the city will have settled its lawsuit against Detroit over how much Detroit owes the Hamtramck from tax revenue collected from GM’s Poletown plant.

Councilmember Jankowski was skeptical of warnings that if the city fell into payless paydays the state would immediately send in an emergency financial manager, calling that a “scare tactic.”

Yet minutes later, he said about the loan: “We have to do this.”

The coming year will give Cooper a chance to negotiate with the city employee unions for contract concessions. He has been trying to get the unions to agree to a less expensive health care provider, which Cooper estimates would save the city about $1 million a year.

So far, the unions have not agreed to significant cuts. That may change, even without the help of the unions, in the weeks to come. State legislators are set to vote on changes to a state law regulating when the state can take over a financially distressed city in order to allow the city to tear up union contracts without the unions’ consent.

Hamtramck’s financial picture turned bleak in the last year-and-a-half when Detroit stopped payments from the Poletown plant, which in the past amounted to $2-$3 million a year.

Detroit is claiming it has overpaid Hamtramck $7 million over the last several years. The two sides have been negotiating a deal through the state Treasury Department and that deal is expected to break through in the coming weeks.

In the meantime, Cooper has warned that the city will run out of cash by mid-March. The state loan will buy the city time to work out other financial problems that have come up since the economy tanked.

Other problems with the city’s budget include reduced tax revenue sharing aid from the state and declining property values.

Hamtramck isn’t alone in facing tough financial times. Many other communities are on the brink of insolvency. Hamtramck just happens to be the first municipality to bring its troubles to the state.

Several weeks ago Cooper asked permission from the state to file for bankruptcy, a request that Treasury officials turned down. State officials instead suggested the city accept a loan.

The loan is a sweet deal, as far as loans go. The interest rate is less than 1 percent, amounting to a payment of $5,000 a year. The city doesn’t have to make payments on the principle of the loan for the first 10 years of the 20-year loan.

The city can also pay back the loan at any time, which may happen sooner rather than later if a settlement with Detroit is reached in the near future.