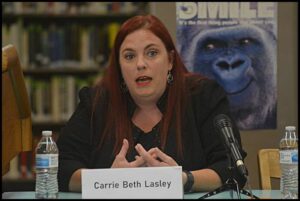 By Charles Sercombe
Councilmember Carrie Beth Lasley struck out twice in trying to censure Mayor Karen Majewski and City Manager Kathy Angerer.
Lasley said the two deserved the censures over the handling of a grant five years ago that went toward city park improvements.
Lasley accused Angerer of “misappropriating” $5,419. She obtained a letter from a Wayne County official, through a Freedom of Information Act request made last August, that outlined the alleged mishandling.
The city was not forced to pay back the amount, but instead the amount was deducted from the city’s yearly Community Development Block Grant.
Mayor Majewski was included in her censure proposal because the mayor did not reveal the incident to the public which, had it been made known, might have prevented Angerer from being appointed as city manager, Lasley said.
Majewski did not respond to a request for comment by The Review. She also did not say anything about it at last week’s city council meeting when the censure proposals were on the council agenda.
Lasley did not receive a motion of support from her council colleagues to have the proposal voted on.
Angerer lashed out at Lasley at the meeting, saying that the accusation is “inaccurate” and “libelous.”
“Nothing criminal happened,” Angerer said, adding that Lasley made “baseless allegations.”
Angerer also noted that Lasley did not give her the courtesy of first asking what happened with the grant.
Lasley said that she requested documents from the city about the matter, but was told none existed. Angerer said that she searched various files for the document Lasley requested but could not find it. She also said she encouraged Lasley to go to the county.
Lasley indeed turned to the county, and in response to her Freedom of Information Act request received a copy of a letter by Terry Carroll, a program administrator, that was written in 2017.
His letter was sent to Majewski, Angerer and then-City Manager Katrina Powell.
Majewski lost her recent bid for another term as mayor, and will be leaving office on Dec. 31 of this year after serving as mayor for 16 years.
Lasley did not seek a seat on council, and will also be leaving office at the end of the year.
Lasley said that the council’s silence on the matter is a reason why “other communities laugh at us over exactly what happened here.”
She said the censures were merely a “slap on the wrist.” Lasley also said that there are other issues with the renovation of Hamtramck Stadium and the library, but she did not elaborate.
Posted Dec. 3, 2021

One Response to Council rejects censures