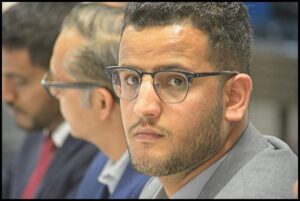 By Charles Sercombe
The resignation of Councilmember Adam Albarmaki became official at last Tuesday’s city council meeting.
According to the city charter, his replacement is the runner up from the field of six candidates in the last council election, which was in November of 2021.
That person is Muhith Mahmood.
Interim City Manager Max Garbarino told The Review that he has been in contact with Mahmood who has said he is interested in the job and says he still qualifies as a candidate.
In other words, Mahmood says that he is still a resident of Hamtramck.
But there is a question of whether he truly is a resident.
According to Hamtramck and Troy property tax records, he lists his address as being in Troy. He also owns a house in Hamtramck, but does not claim a Homestead exemption for it, which would mean he lived there.
Instead, he had a Homestead exemption at his Troy house.
Mahmood told The Review he did live in Troy for a time, but moved to his other house at 3119 Holbrook before the 2021 primary election for city council. He added that he has not yet updated his property tax records.
The Troy house is located at 5555 Patterson.
Albarmaki had been in office since last January. His vacated term expires in three years. In his resignation letter, he said that he “underestimated the amount of time required to perform this role to the expected standard.”
He said that, because of his job duties, he has to move out of the city.
“This is not a decision I take lightly, but after consulting with mentors and family, I have decided that it is for the best,” Albarmaki said.
You can read his entire resignation letter inside this issue.
Posted Dec. 2, 2022