Council weighs in on school tax 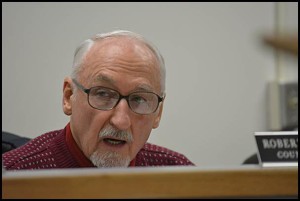 City Councilmember Robert Zwolak is calling for “consensus” on the proposed school millage.

By Charles Sercombe
Hamtramck School Boardmembers are obviously for the proposed school millage, but are other local elected officials?
City Councilmember Robert Zwolak got that ball rolling at the most recent council meeting, in which he encouraged his colleagues to publicly support it.
“It’s incumbent that we work with our school system to repair and rebuild our schools,” Zwolak said.
The only feedback he got at the meeting was from Councilmember Mohammed Hassan, who said he is opposed to the millage and that the council should speak as individuals not as one.
The school tax would add four mills to property taxes over the next 10 years. The revenue collected can only be used to fix up school buildings, and cannot be used to purchase school supplies or go to salaries.
A special election on the millage will be held on May 6.
Mayor Karen Majewski said she didn’t comment at the council meeting about the school millage because she didn’t know if that would have been illegal to do so at the meeting.
In a telephone interview, Majewski said she backs the millage.
“Our school system needs it – period,” she said.
As for Hassan’s opposition, she said Hassan’s “loyalties” are with the charter schools.
Councilmember Anam Miah was the only councilmember contacted who said he has not made up his mind yet.
“I’m in a grey area,” he said, but promised to look into the issue.
Councilmember Andrea Karpinski said the cost of the millage shouldn’t turn off voters because “it’s just a drop in the bucket.”
She also stressed that taxes have decreased in recent years, thanks to some local court-imposed payments coming off the books and a drop in housing values.
Not surprisingly, Councilmember Titus Walters also supports the school tax. He doubles as President of the School Board.
Walters said that with the closing of Catholic schools in Hamtramck, the public schools are the last link to the city’s education tradition.
“We have to make sure we’re doing everything we can to save it,” he said.
Councilmember Abu Musa did not return a call for comment.