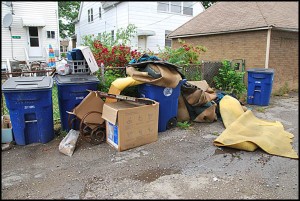 By Charles Sercombe
City Councilmember Robert Zwolak says homeowners are paying twice for garbage pickups.
And he wants the Attorney General’s Office to determine if the city is unlawfully charging homeowners.
His claim goes back to an action the city council took in 2010, before an emergency manager came to town. Back then, the council wanted to shore up the city’s sanitation tax, which is almost 3 mills. The tax was bringing in $600,000 a year then, but that was $130,000 short of the actual cost of collecting garbage.
So, the council agreed to tack on a $3 monthly fee to the water service bills, which was estimated to bring in an extra $250,000 a year.
Zwolak was not on the council at that time. He says the extra fee is “backdoor taxation.”
He said it also “opens a Pandora’s box” to adding other fees.
At Tuesday’s city council meeting he proposed a resolution to have State Rep. Rose Mary Robinson and Sen. Bert Johnson request the Attorney General’s Office to look into the matter.
The council agreed.
Emergency Manager Cathy Square said the issue is moot because the AG’s Office ruled on similar fees years ago, and found it to be a legal practice.
“This is old, old news,” Square said.
The only issue Square said she had with the fee is that it should not be on the water bills. She said it should instead be placed on property tax bills.
Square said putting the fee on water bills is unwise because a lot of property owners fail to pay their water bills.
Today, Square said, the sanitation tax collects $543,000 a year. The city’s annual sanitation cost is $750,000. With the added fee, she said, the city collects another $475,000.
At least on paper.
Square said that because there are so many delinquent water bills it’s hard to calculate what the city actually collects.
One thing is for sure, she said, without the fee “I wouldn’t be leaving.”
Square is scheduled to leave her post at the end of June, but that could be extended if the city’s finances aren’t fixed.
A portion of the tax money collected by the sanitation tax pays for park clean-ups and garbage can purchases.