Councilmember is still a no-show per doctor’s order 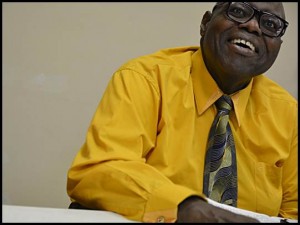 Councilmember Titus Walters missed his 8th city council meeting this week despite saying he is healthy.

By Charles Sercombe
Despite saying he’s healthy enough to get back to attending city council meetings, Councilmember Titus Walters was still a no-show this past Tuesday.
In recent weeks it had been rumored that Walters was going to step down from his seat on council after missing several meetings in recent months.
Walters apparently has a heart condition.
Last week Walters denied he planned to resign from council, and stressed, “I feel good, and I’m getting stronger every day.”
But at Tuesday’s council meeting it was announced Walters would not attend. When a member of the audience asked for more details, Mayor Karen Majewski said he is taking new medication and was told by his doctor to stay at home.
Majewski said Walters would also miss Wednesday’s school board meeting, which was the last one of the year, and the last meeting for Walters.
Walters, who is president of the board, did not seek re-election to the school board this year.
Walters’ absence on council has heightened a deepening division among councilmembers over adopting a policy on naming streets in honor of people.
Walters was part of a 3-3 tie on the policy, but without him voting on the side of dissent the policy has been pushed forward.
There is one more city council meeting scheduled for this year, on Dec. 23. So far, the council has not taken action to cancel the meeting because it is so close to Christmas.
If Walters were to resign in the new year, the candidate who finished behind him, Rashad Almasmari, would be asked to join the council. If that person can’t fill the position, the next runner-up, Susan Dunn, would be tapped.