Councilmember objects to changes made by city manager 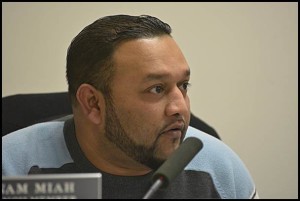 By Charles Sercombe
There’s a new city manager in town, and now a new way to conduct city council business.
And so far, Councilmember Anam Miah is not pleased.
Miah questioned several changes made to the city council agenda at the most recent council meeting.
The agenda now limits public comment to one opportunity, where as before there were two times in the meeting the public could comment, and noticeably the council no longer has a vote on whether to approve the agenda from the get-go at each meeting.
The changes stemmed from City Manager Katrina Powell, who said she has the authority to set the agenda under the rules of the City Charter and the final directives set down by outgoing Emergency Manager Cathy Square.
That led Miah to quip:
“This is a city council meeting, not a city manager meeting.”
Miah didn’t get support from Mayor Karen Majewski, who said: “It’s a new ball game.”
In a telephone interview with The Review, Miah said the point is the council had already set the agenda format a few weeks earlier. Although the formatting of the agenda may look like a minor thing, Miah said it has bigger implications.
“If the state is implying that they have day-to-day control, then why are we (the council) still here?” Miah said. “The city manager is not in control of all things that go on. The people of the community elected the council to control the city.”
Miah said he is particularly upset that the public can now only speak once, at the beginning of the meeting, not twice as before — at the beginning of the meeting and at the end.
“That’s one of the things I was shocked about,” Miah said.
As for the changes made by Powell, Miah added: “If you wanted to tweak something up you should have come to the council.”
Powell has a two-and-a-half year contract with the city.