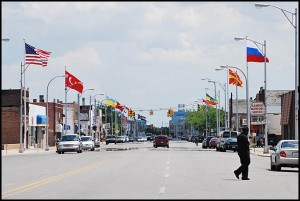 Should Old Glory get more flying time on Jos. Campau?

But his colleagues on city council don’t agree.

The flagpoles were brought back to life, so-to-speak, last spring when the city’s Human Relations Commission raised flags representing the various nationalities who live in Hamtramck.

Anchoring the display at each end of Campau, at Caniff and Carpenter, are American flags, which conforms to proper flag protocol, said Commission Chairman Russ Gordon.

For years, the flagpoles remained unused and in need of repairs. The Human Relations Commission raised money to repair the poles and purchase international flags.

While many in the community welcomed the display there was a rumbling of disapproval from some who thought only American flags should be displayed.

Gordon defends the mix of flags, saying it brings the community together by honoring its diversity, as well as draws visitors.

“I want to be inclusive. I want to bring everybody into the fold,” Gordon said. “There’s room for everybody here.”

However, said Gordon, who is also a military veteran, he is not opposed to periods of time when only American flags are displayed.

“I support American flags,” he said.

As for the city council’s perspective, it came down to Zwolak’s motive and how the city can afford to purchase American flags, which get tattered and frayed quickly by the weather.

City Councilmember Anam Miah took another approach, saying that the international flags reflect the American immigrants of the city.

“To me, these are all American flags,” Miah said.

Councilmember Cathie Gordon, who is not related to Russ Gordon, disagreed with that interpretation and accused Miah, a Bangladeshi-American, of being divisive.

Zwolak said he was prompted to make the proposal by fellow veterans. He said that he is open to modifying his proposal, including the number of times the American flags are displayed and for how long.

“We just wanted to make a bigger showing,” Zwolak said. “It wasn’t meant to go against the other flags.”