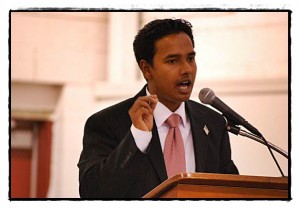 City Councilmember Kazi Miah has cleared up his whereabouts for the last several weeks.

In his abrupt, but not entirely surprising, letter of resignation a day after Tuesday’s election, Miah explained that he is now living in Hawaii to be with his parents. His father moved there because he was told to relocate to a warmer climate to properly recuperate from a recent stroke, Miah said.

Here is what Miah said in his official resignation letter to his council colleagues:

“As some of you might know, my father had a major stroke last year. He suffered memory loss and is still recovering. The doctor recommended that he resides in a warmer climate. As a result, and with careful consideration we have decided to move to the state of Hawaii. Therefore, I am resigning from my position as a city council member effective as of November 9th 2011.

“From the bottom of my heart I would like to thank the citizens of Hamtramck for giving me the honor of serving you for the past two years. I hope you will understand my decision was in benefit to my family. I am looking forward to spending quality time with my baba.”

Not everyone is buying it. Mayor Karen Majewski questioned the timing of Miah’s resignation, which was first announced on Facebook just hours after Tuesday’s election results were in.

“Kazi knew exactly what he was doing by waiting for this election,” Majewski said.

A few months ago, Miah contacted City Manager Bill Cooper to ask the council to officially excuse his absence from the council meetings for four meetings.

Miah did not offer an explanation for his absence, nor did he say where he was.

The council reluctantly granted him the excused absences.

Miah was expected to return to this week’s council meeting, but others thought he was never coming back.

The upshot of Majewski’s criticism is that the timing of Miah’s resignation has caused a needless legal inquiry over who will take his seat for the remainder of his term, which has another two years to go.

It’s a case of whether Abdul Algazali – who is the next highest vote-getter from Tuesday’s election – takes his place, or whether it’s Alan Shulgon from two years ago.

City Attorney James Allen was still looking into the matter when The Review went to press on Thursday.

At the time of Miah’s election, he was the highest vote-getter, a fact that he frequently pointed out. He also had begun to buddy up with veteran Congressman John Conyers as a sort of wannabe protégé.

Is Miah’s hope of becoming the next rising political star on hold?

Well, he’s still in his early 30s (or so we think), so there is plenty of time to jump back into politics later.