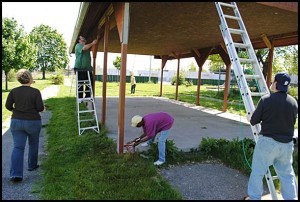 The City Council wants to rekindle a Parks Advisory Board with the Public School District, but so far the district hasn’t shown interest since it has a recreation commission.

Sometimes a seemingly simple request can turn into a complex debate.

That’s exactly what happened last Wednesday (Feb. 13) when City Councilmember Robert Zwolak appeared before the School Board. He was there to ask the School Board to select two people who might make good candidates for the soon-to-be-resurrected Parks Advisory Board.

As a reason for his request, Zwolak presented the School Board with a copy of the city ordinance outlining the composition of the Parks Advisory Board. According to the document, City Council is supposed to choose three appointees and both the School Board and mayor each choose two.

However, speaking on his own behalf, Hamtramck Public Schools Superintendent Tom Niczay didn’t welcome the request. For one thing, he felt that at six-and-a-half years old the ordinance was outdated and had never come to fruition.

More specifically, Niczay pointed out that the ordinance was written in a way that gave any school with 160 students a spot on the Board. The ordinance states that any educational entity that represents four percent of the school population of the city could have one member on the committee.

“I feel there was no communication about this,” said Niczay. “For the city to move forward we have to work together, but I can’t ask the board to support this.”

To make a point about ways that the city and schools need to work together more, Niczay then showed a letter from a district parent whose child had fallen and broken her glasses due to unsalted sidewalks.  When the girl’s parents complained to the city, they were told it was DTE’s fault and nothing could be done.

Niczay said that it is troubling that DTE can come into town and destroy the sidewalks without replacing them because it causes dangerous conditions. The danger is compounded by the city not salting the sidewalks in front of city-owned property, especially near school zones.

Zwolak agreed with Niczay on that point, and noted that during the schism between the city and school district he tried to keep the two entities amicable. And as for bringing the ordinance to the city’s charter schools first, Zwolak said they “hadn’t even looked at that.”

“The plan is initially to get the commission up and running,” he said. “I’m not even considering approaching the charter schools.”

After a little more discussion both Zwolak and Niczay agreed that it would be best for everyone involved if both parties worked together, and School Boardmember Alan Shulgon offered his own summation. Noting that the Recreation Commission was currently on hold, he agreed with Niczay and the discussion was tabled.

“By complying with your ordinance we may accidentally give away our right to the park. Before we sign anything we need to have a legal opinion,” said Shulgon. “We have to be very careful. There is a dialogue. We have our concerns, you have yours.”