By Charles Sercombe
It’s round two in Hamtramck’s hunt for a new city manager.
Last Tuesday, city councilmembers were presented with four candidates for the job, and interviewed them over a one-and-a-half hour period, separately of course.
The council previously interviewed candidates for the job last April, but Emergency Manager Cathy Square couldn’t come to contract terms with them.
So, a new search was conducted. The top candidates of that search were presented to councilmembers, who were allowed to ask questions pre-approved by Emergency Manager Square. 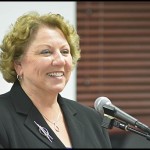 First up was Michigan native Elke Doom, who has been the city manager for the city of Princeton, West Virginia for six years.
Doom said she has been aware of Hamtramck’s cultural diversity and its ongoing infrastructure problems.
Her immediate task, if she got the job, would be to focus “on the important needs. … and then go for the dollars.”
She pulled no punches when describing Hamtramck’s main district, Jos. Campau, looking “a bit tired and needing some freshening up.”
Expanding on Hamtramck’s ethnic diversity, Doom said she can empathize, saying she is first generation American who didn’t speak English as a first language when growing up.
“In many ways Hamtramck is familiar to me,” Doom said.
Asked how Hamtramck fits into the region and Detroit, Doom said it’s a matter of “working together in tandem.” Detroit’s plan to come out of bankruptcy, she said, can be used as a model for Hamtramck. 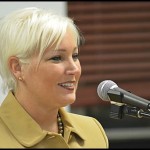 Katrina Powell was the former city administer for the city of Longwood in Florida, and also held other city administration positions in other Florida communities going back to 2005.
She currently owns a car dealership that specializes in leasing cars for undercover operations. She also retired from the military after 20 years of service.
Powell’s approach to solving Hamtramck’s financial crisis is to “wipe the slate clean.”
She said that Hamtramck’s collection of small businesses is one of the city’s key strengths and something that needs to be further nurtured.
Hamtramck’s ethnic diversity was of course on the mind of all the candidates, but Powell gave it an interesting spin, saying: “It’s great, I can visit several different countries just in one block.”
Powell was also aware of Detroit’s plight, and said that any plan for Hamtramck going forward will hinge on the fate of Detroit.
“As goes Detroit, goes Hamtramck,” she said.
Detroit’s redevelopment, she added, will “bleed over to Hamtramck.”
Excitement and national attention about Detroit has been growing in recent months, and Powell echoed that.
“This is the best time. … Let’s start all over and figure out what to do,” Powell said.
Although a lot of emphasis was put on being new, Powell said it’s just as important that “we need to keep the character” of the city. 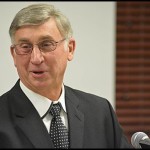 John Gabor of Marine City seemed to have the most management experience among the candidates, but he falls short of a city charter requirement that says a city manager must have experience managing a city with a population of at least 10,000.
Marine City’s population is a little over 4,000.
Gabor spent 32 years in management for GM and Ford before making a career change.
He said the city’s diversity is something that can be “leveraged” to “get through complex issues.”
As for working with Detroit, he said Hamtramck “has to learn how to play with Detroit.”
“We need to buddy up,” he said.
Down the road, Gabor said he expects to leave the city “in a place better than when I got here.”
With a full career in the auto industry behind him, and one who appeared to qualify to retire at any point, Gabor was asked “why come to Hamtramck?”
“I like a challenge,” he said. “It excites me, gives me that adrenal run. It’s time to do something different.” 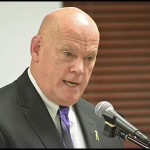 Warren Brown was the most colorful and blunt-speaking candidate. He is the Sandusky County Administrator in Ohio.
He said the city’s success will depend on training personnel and “ferret out every grant conceivably possible.”
As for Hamtramck’s famed cultural diversity, Brown said he doesn’t see “color.”
“I see a heart and a soul,” he said.
Asked about his management style, Brown got everyone’s attention saying it’s like “an iron fist in a velvet glove.”
One of the predetermined questions was to ask each candidate if in their career they made mistakes and what they learned from them. Brown took a long pause, and then said he would need to take an even longer pause to contemplate the question.
Finally, he said he had never made a mistake as a manager.
With the interviews completed, the council was invited to talk with Emergency Manager Cathy Square and share their thoughts on the candidates.
Several days after the interviews, Square said she is still thinking over the candidates, but might include a suggestion from City Councilmember Robert Zwolak to hire two of the candidates, one to act as city manager and the other to act as his or her assistant.
Square said she will make her choice known within a week or so.

(Editor’s note: According to our sources, Katrina Powell has the inside track to the job.)