Countdown is over for the new opening of a city landmark 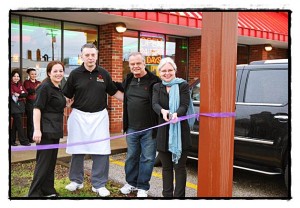 The time was right. Little hands helped big hands. And so The Clock Restaurant finally – after months of false starts and speculations – threw open its doors to Hamtramckans and city visitors alike this past Monday morning.

The Review met with owner Manjola Vuktilaj on Wednesday, in the now-gleaming interior of the spruced up and partly redesigned icon on Jos. Campau. Tiled surfaces shown with a brightness long absent from the old establishment. A small pile of expanded menus lay on the counter near the cash register, now smartly tucked back into an unfamiliar corner.
In the lull between lunch and dinner, about four tables held patrons. For someone who had visited there mostly in the wee post-bar hours, it seemed refreshingly quiet. But then, this new version of The Clock hadn’t yet hosted a rowdy Saturday night 2 a.m. scene yet, either. That will almost certainly come this weekend.

Obtained from the previous owner and then subjected to an intensive six-month renovation, the eatery seems poised to redefine itself as a better, 2.0 version of that gritty old grub slinger. Walls were power-washed in what seems like an almost symbolic cleansing. Snazzy neon track lighting was added. The effort shows.

“My kids couldn’t stand it when we first walked in here,” laughs Vuktilaj. “They made faces.”

The menu holds some real promise now. Similar in ways to Maine Street a couple of blocks to the north, the two places, in tandem, create their own little row of Albanian/Macedonian tinged American dining. Some items, like the sub sandwiches, seem like real bargains in the $5 to $6 range.

Asked what hasn’t changed, Vuktilaj responded, “The name.” The answer seems appropriate, given that it was certainly time to modernize what she says is the original Clock Restaurant location in the area.

As with any business trying to reinvent itself, there can be obstacles. A Google search for “Clock Restaurant” Hamtramck leads first to yelp.com claiming the place is still closed, and then, three results down, to Detroit.citysearch featuring an iffy review of the old establishment front and center. Also, given what was spent to renovate the place, there isn’t yet the money to do much advertising.

And then, there’s Ice Bar (also formerly known as Shadow Bar) directly across the street, whose throngs of patrons used to routinely jam up the Clock’s parking lot. Vuktilaj says they’re formulating a plan to deal with that, should it start up again.

For fans of Hamtown’s bar scene, it will be nice to have a centrally-located, and now much-improved, 24-hour diner wherein to satisfy the drunken hungries once again. For the average lunch and dinner crowd, it’s always nice to have another choice. And for city old-timers, historians and the just-plain nostalgic, it’s certainly fun to have a city icon back in business, and seemingly better than ever before. 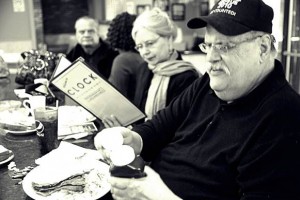