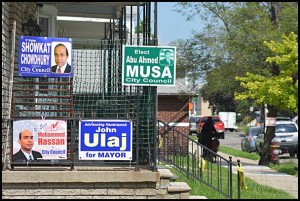 Candidate signs are popping all over town now that the Aug. 6 Primary Election is just a couple of weeks away.

And judging by the number of campaign lawn signs spread throughout town, this is looking like one of the livelier elections in recent years.

And this evening (Friday, July 19), the public has a chance to hear what the four mayoral candidates have to say at a candidate forum being sponsored by the Southend Block Club.

The event goes from 6-9 p.m. and will be held at People’s Community Center (located at Jos. Campau and Danforth). The forum is only for mayoral candidates.

Susan Dunn, president of the block club and a candidate for city council, said the evening will play out like this:

“… The four mayoral candidates will have five minutes to speak about whatever they want. The floor will then be opened to the public to ask questions. We only ask that everyone be respectful of time so everyone who wants can speak.”

In other developments, the correct ballots are now out and those voting absentee should have already received one. The initial ballots that were printed contained numerous errors and had to be thrown out.

There are just three races on the ballot — all local seats. Mayor Karen Majewski is seeking her third term and is facing three challengers. Two of them are currently sitting on city council: Abdul Algazali and Cathie Gordon. The third challenger is the owner of The Review newspaper, John Ulaj.

Because Gordon is running for mayor while in midterm of her council position, she will be forced to step down at the end of the year. Her departure created an open seat, and there are five candidates seeking the job.

There are also three seats with a full four-year term open. Councilmember Mohammed Hassan is the only incumbent seeking re-election. Councilmember Tom Jankowski decided to bow out of this election, and with Algazali running for mayor, that created two empty seats.

There are 10 candidates, including Hassan, running for one of the three council seats.

This race includes Titus Walters, the president of the public district school board.

Other notables include government watchdog Susan Dunn and perennial candidate Richard Fabiszak, who has usually run for mayor in every local election since the 1980s.

There is a newcomer in the four-term race, Anthony J. Liggett, who is also known as DJ Topkat.

Interestingly, at least maybe to those who pay close attention to local politics, there are two council candidates who have changed their names, and that change has been noted on the ballots.

Candidate Jewel Mohammed was once named Mohammed Joel, and Armani Asad was once known as Asadur Rahman.

Because there are no other races or issues on the ballot, voter turnout is expected to be low. That means the difference between winning and losing could amount to a handful of votes.

Typically in such elections no more than 1,500 voters, out of 11,000 registered voters, bother to participate.

As the saying goes, every vote counts.