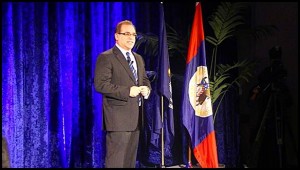 Despite some financial setbacks, Wayne County Executive Robert Ficano was upbeat about economic development during his 11th State of the County Address.

Wayne County Executive Robert Ficano echoed what many communities in the state – including Hamtramck – are complaining about.

The decrease in property tax collection.

For Wayne County the loss equaled $100 million, Ficano said during his 11th State of the County Address on Thursday evening.

Despite making cuts of 2,000 jobs, Ficano said the loss in tax revenue is stunting the county’s rebound.

He said that because of Proposal A and the Headlee Amendment, which caps how much of a tax increase communities and the county can impose on property owners, it will take until 2025 to reach the tax revenue level of 2008.

He urged state government leaders to reconsider those two pieces of legislation. Proposal A was passed in 1994 and the Headlee Amendment was passed in the 1970s.

“Our efforts are still hampered by Proposal A and Headlee, legislation that was designed to deal with a completely different reality — booming growth and skyrocketing home prices. … It’s a broken model,” Ficano said. “We need to address the structural deficiencies that are built into the way we fund local government.”

Despite the financial setbacks, Ficano was upbeat about economic development in the county. He cited numerous examples of growth, including the upgrades in Cobo Hall, plans for regional transportation, the creation of thousands of jobs and the growth of the healthcare industry.

And speaking of healthcare, Ficano noted the recent opening of the county’s medical clinic in Hamtramck is designed to offer medical care to people regardless of their income.

Attending the State of the County Address from Hamtramck were Mayor Karen Majewski and School Board President Titus Walters.