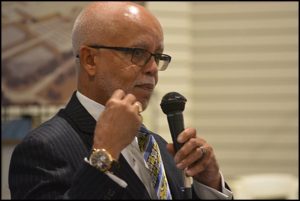 Wayne County Executive Warren Evans held a press conference Wednesday morning at the Hamtramck Historical Museum to talk about a recent study on the beneficial financial impact of immigrants.

By Charles Sercombe
Hamtramck served as a backdrop for Wayne County officials showcasing a recent study on the financial impact immigrants contribute to the rejoin.
Hamtramck, a home to newly-arrived immigrants for decades, already knows of the financial advantages to welcoming new arrivals from other lands.
But the county study put some teeth in the issue.
Wayne County Executive Warren Evans and a host of other county officials were on hand Wednesday morning at the Hamtramck Historical Museum to unveil the study, performed by the New American Economy and in partnership with the county executive’s office and Wayne United.
The statistics are, indeed, impressive:
o Immigrants contributed more than $10.5 billion to the county’s Gross Domestic Product, which is a measurement of the county’s market value of all the final goods and services produced year to year.
o Immigrants also pay $430 million into Social Security, and $110 million into Medicare.
o After paying taxes, immigrants have a spending power of $3.2 billion.
o Between the years 2012 and 2017, the county’s population count increased by 24 percent, thanks to the influx of immigrants. That helped offset a loss of 2 percent of the population during those years. In other words, without that surge of immigrants, the county would have lost almost 4 percent of its population. In the bigger picture of things, the immigrant population totaled 164,000 people in 2017.
o As far as taxes go, immigrants pay over $736 million in federal taxes, and almost $346 million in state taxes.
So just where are these immigrants coming from?
Since the country of Yemen deteriorated into a civil war in recent years, refugees from that country made up the biggest portion of the new arrivals to the county, at 14.5 percent.
Next up were immigrants from Mexico, at 13 percent, India at almost 11 percent, Lebanon at 9 percent, and Bangladesh at 5.7 percent.
In Hamtramck, most of the recent immigrants come from Yemen and Bangladesh. In the 1990s, there was also a flush of immigrants from Bosnia, which was also experiencing a civil war at that time.
Before all that, most of the immigrants came from Poland and Ukraine.
Evans said it’s time to get past the portrayal of immigrants being a financial burden to the country – an image that is stoked, some say, for political reasons.
“We need to embrace our immigrant population,” Evans said at the press conference Wednesday morning, to about 100 people who had gathered. “They bring value to our community.”
He added: “Diversity is what makes us great.”
Oct. 18, 2019