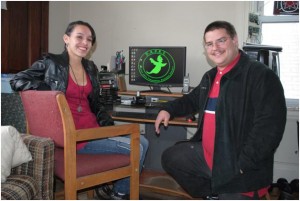 If there’s something strange in your neighborhood, who you gonna call?

Over the last year, local residents Matthew Herch and his fiancé Julie Kelly have been working to organize and equip a team to observe and document the area’s paranormal activity. Now – just in time for Halloween – they’re ready to investigate the strange and unexplainable involving everything from ghosts and poltergeists to UFOs and unknown creatures.

For anyone who has questions about an odd or unsettling experience, DAPRS can give you answers. Beginning with a request for assistance, DAPRS then conducts an interview to obtain more information about the occurrence. After that, it researches the history of the site to determine what the source of the activity could be.

Then comes the fun part.

After the research phase, DAPRS is ready to begin the actual investigation. This involves going on location to the site of the paranormal occurrence to collect evidence that either confirms or denies its existence. Once this has been completed – a process that usually takes between two and six hours – a detailed report is written up. Depending on the findings of the investigation, further action may be recommended.

During the investigation phase, the team uses an assortment of high-tech tools to verify their findings. In addition to both a regular and digital camera, the team also uses a 720p HD digital camcorder, digital voice and microcassette recorders, an electromagnetic field (EMF) detector, thermometers and computer software to detect the presence of the paranormal. And the best part is that they do it all for free.

So how did it all begin?

Well, Herch got interested in the paranormal as a young child, after the death of his great-grandfather. During the week that followed his death, Herch and his family experienced a number of strange smells and noises.

Kelly also had first-hand experience with strange sensations when at the age of 17 she heard her voice being called despite being in an empty house. Those events had a profound enough effect to pique a lifetime of curiosity for the both of them.

Now, through DAPRS they’re ready to help others figure out the causes and meanings of their paranormal encounters. Right now DAPRS is working on a project called “Call for Content” which seeks to create a list of haunted places that will be compiled into a list of interesting sites. To document the DAPRS’s past investigations and ongoing progress a website has been set up, and it is there that you can get in contact with the team if you’re interested in having them conduct an investigation.

“Our goal is to help people who see, hear or feel things that they don’t understand,” says Herch. “We want to try and help them either work through it or get rid of it – or at very least explain it.”

The Detroit Area Paranormal Research Society can be found on the web at www.detroitaprs.info. Herch also writes a local blog called “Opinions of a Madman” which can be found at http://www.matthewherch.blogspot.com.